Imperial Rituals in Japan
The Emperor, embodying the god of the ripened rice plant, plants the first rice of the spring and harvests rice from the plants of the autumn. In one of the most solemn Shinto ceremonies of the year the Emperor, acting as the country's chief Shinto priest, ritually sows rice in the royal rice paddy on the grounds of the Imperial Palace. 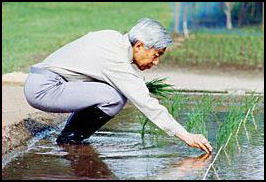 There is also a set of harvest festivals in November carried out at the imperial palace and shrines throughout the country,
Niiname sai 新嘗祭 "Celebrations of the First Taste" .
. WKD : Rice as Japanese Food .


quote
[Sai den]
Literally, a "dedicated" or "tabooed" paddy field, namely, one specially reserved and dedicated to the production of sacred rice for use in offerings of grain and ritual sake (miki) to the kami of a shrine.

While saiden are sometimes found at ordinary shrines as well, the term is specially used to denote those fields where rice is harvested for offerings of food and wine on the occasion of the Grand Festival of Firstfruits (Daijōsai).
Also called iwaida or nukihoden.

In the case of the Daijōsai, two dedicated fields, called Yuki 悠紀 and Suki 主基 , are designated somewhere within the country in preparation for the ritual. In ancient times, the fields were selected on the basis of ritual divination, but in 1909, an Imperial Household Ordinance called Tōkyokurei ("Ordinance Regarding Accession to the Throne") was issued, laying out the ritual procedures accompanying the accession of a new emperor. The eighth article of that ordinance states,
"When selecting saiden for the Daijōsai, a region to the east and south of Kyoto shall be selected as the Yuki Region, and a region to the north and west of Kyoto shall be selected as the Suki Region; these regions shall be so designated by imperial proclamation."

The ninth article of the Ordinance goes on to stipulate that from among the regions so designated, the Imperial Household Minister was to select specific fields as saiden.

On the occasions of the Daijōsai for the Taishō and Shōwa emperors, traditional tortoise-shell divination (kiboku) was used in 1914 and 1928 as part of the "ritual for determining dedicated fields" (Saiden tenjō no gi) for the ceremonies. The "Ordinance Regarding Accession to the Throne" itself was abolished in 1947, but in practice, the Daijōsai held in 1990 for the current emperor followed the pattern laid down in the 1909 Ordinance. However, the designation of saiden was undertaken by the Imperial Household Agency, with Akita Prefecture being selected as the location of the Yukiden, and Oita Prefecture as the location of the Sukiden.
source : Inoue Nobutaka, Kokugakuin


shinden 神田 "field of the Gods"

quote
Shinden - "Divine rice field."
A rice paddy where the offerings used in shrine ceremonies are grown, or for otherwise augmenting the various profits of a shrine. Such shrine fields were already provided for as grants from the state under the centralized ritsuryō (administrative and penal laws) established in the 8th century. Under the later system of privatized estates or so-called "manors" (shōen), the nature of divine fields changed, and they became exclusive lands owned by the shrine.

It became increasingly common for powerful shrine patrons to dedicate lands to shrines, resulting in the steady expansion of shinden. Most such fields were exempt from the payment of annual tribute taxes by the owner, and field taxes were instead applied to ritual offerings, the repair and rebuilding of shrine structures, and to the stipend of the shrine administrator.

Due their nature as sacred lands dedicated to the kami, shinden were in some cases tilled without the use of manure. Dedicated fields were also known by such names as
shinsen-den 神饌田, miyaden 宮田, gokūden 御供田, and mitoshiro, mitashiro 御戸代 / 御刀代 / 御田代 .
The term saiden is used to refer to the special fields called yuki and suki, which provided offerings at the time of the Grand Festival of Firstfruits or Daijōsai.
source : Yumiyama Tatsuya, Kokugakuin 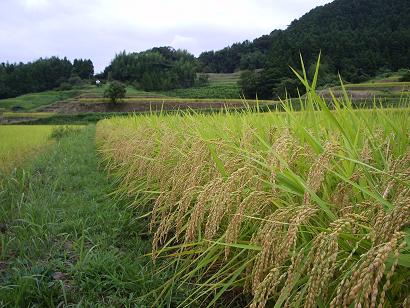 in the fields
with ripe rice plants for the Gods
the sickle is used . . . 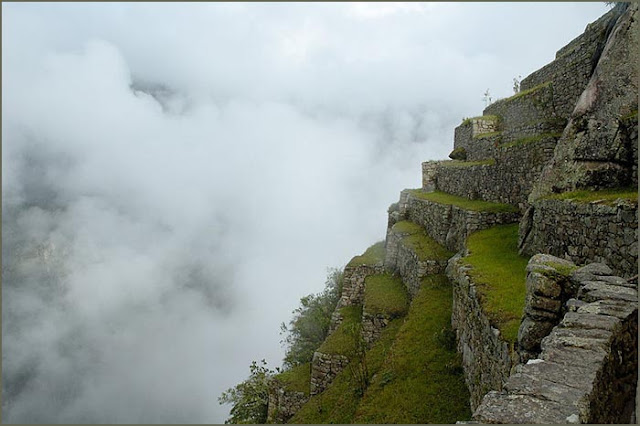 The architecture is adapted to the natural form of the mountains. Approximately 200 buildings are arranged on wide parallel terraces around a vast central square that is oriented east-west. The various kanchas or compounds are long and narrow in order to exploit the terrain. Extensive terraces were used for agriculture and sophisticated channeling systems provided irrigation for the fields. Numerous stone stairways set in the walls allowed access to the different levels across the site.
© More in the WIKIPEDIA !