Finally the great archery contest at the imperial palace takes place on the fifth day of the fifth month.

The horses have been selected in august of the previous year and again in April of this year for training.

- - - - - more kigo in connection with this imperial Yabusame

The imperial guards were divided into the left (sakon) and the right (ukon). They had to do take lots (tetsugai) to find out in which order they were to perform at this contest.


- quote
Yabusame
A type of mounted archery in which the rider shoots at a target from a galloping horse. Arrows with a turnip-shaped head are used. There is a theory that the etymology of the word Yabusame is a contraction of yabaseume and it is thought to mean to shoot arrows on horsback.
Three targets are placed along a track which is about 218 meters (two chō) in length. The archer wears a costume comprising straw headgear (aya-i-gasa), cloak (suikan), a bracer or arm guard (igote), gloves, fur chaps (mukabaki), shooting shoes (monoigutsu); he carries a long sword (tachi) and short sword (koshigatana), a quiver of arrows (ebira) on his back, and has a bound wisteria bow (shigedō).

The number of archers is not fixed; it can number from a few to sixteen. The practice of mounted shooting is known from as early as the reign of Emperor Shōmu in the Nara period. Yabusame is listed in the Shin-Sarugakki by Fujiwara no Akihira (989?-1066) as one of the shooting arts, along with shooting from a running horse (haseyumi), ambush (machiyumi), deer hunting with blazing torch (tomoshiyumi), shooting on foot (kachiyumi), mounted archery (noriyumi) and shooting a distant target from horseback (kasagake).

It is also recorded in the Chūyūki that in 1096, on the 29th day of the fourth month, retired Emperor Shirakawa watched yabusame at the riding ground of the Toba Palace. This suggests that in the capital in the late Heian period, Yabusame was popular among the warriors (bushi) as one of the military arts. From the late Heian to early Kamakura periods, Yabusame became a ritual in shrines and temples: it was offered as a petition to the gods for fortune in battle.
In the early Kamakura period, it became a regular feature of the Kosatsuki festival at the Shin-Hie shrine, and in the Hōjō'e (a festival to free caged animals) of Tsuruoka Hachimangū. As it extended to various regional shrines and temples, yabusame as a religious ritual practice became the mainstream and after the Kamakura period it withered as a practice amongst the warriors.

By the Muromachi period it had died out, and while there were attempts to revive it, these failed due to a lack of knowledge of the ancient practices. According to the Teijō-zakki (1843), during the Kyōhō period (1716-36) the Shōgun Tokugawa Yoshimune planned a revival of Yabusame. He ordered all the military families and feudal lords (daimyō) to present their records concerning Yabusame traditions and teachings.

Urakami Yagozaemon collected these, compiled and published the book Yabusame Ruijū, thus establishing anew the rules and forms of Yabusame. The yabusame practiced today at the Ana Hachimangū at Takadanobaba in Shinjuku, is said to go back to 1728 when the Shōgun Yoshimune ordered it as a petition for the healing of his son Ieshige's smallpox. Yabusame is also an offering at festivals at the Tsuruoka Hachimangū and other regional shrines.
- source : Takayama Shigeru, Kokugakuin, 2007 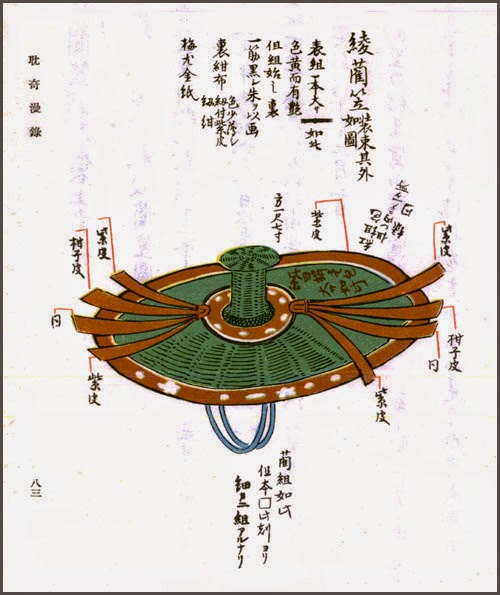 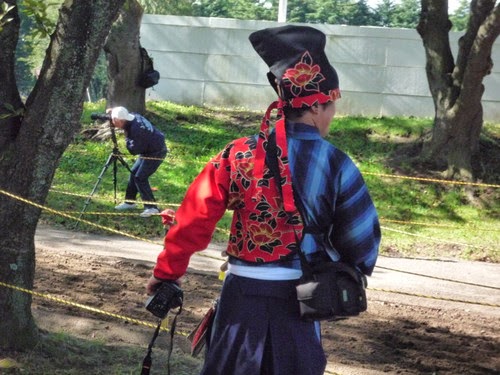 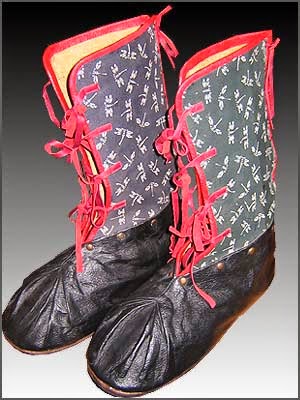 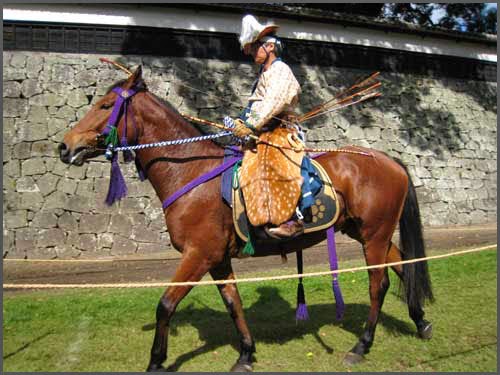 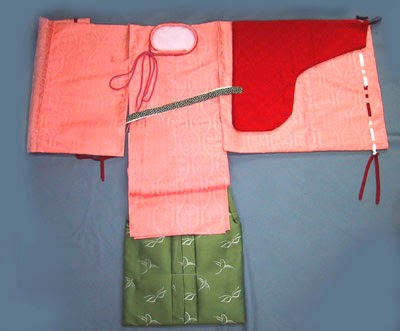 
- quote
Yabusame shinji 流鏑馬神事
This rite takes place on September 16 at Tsurugaoka Hachimangū in Kamakura City, Kanagawa Prefecture. In the afternoon, horseback archery (yabusame) take place at the horse riding area inside the shrine precinct (keidaibaba). Three archers dressed in the hunting clothes from the Kamakura period receive the Shinto priest's (shinshoku) blessing and drink sacred sake (miki). When signaled by the magistrate (bugyō) they start running their horses. There are three targets numbered one to three. They each shoot an arrow from their horses. After three archers are finished, more than ten other yabusame are performed.

On April 22 and 23, yabusame rites takes place at the branch (massha) Hachimangū of Watatsu Shrine, Hamochi Town, Sado County, Niigata Prefecture. Two young archers are selected from clan members (ujiko). They confine themselves for two nights and three days.
Early in the morning of the twenty-second, a bamboo purification place (imidake) is set up on the seashore and a purification ceremony for archers and horses takes place. In the afternoon, the sacred horse (shinme) flanked by two other horses, line up in front of the shrine gate (torii). Then the rite is performed and there is a ceremony (yūmato shiki) where two archers shoot an arrow in the evening sky.
On the morning of twenty-third, three horses line up in front of the torii and food and wine offerings to the kami (shinsen) are presented. Yabusame takes place at a temporary Hachimangū shrine and also in front of the torii.

The first archer starts running his horse from in front of Hachimangū, and throws peach leaves he is holding in front of the first target. The second archer throws peach leaves in front of the second target, reaches the torii, turns around, and returns to Hachimangū. Next, they change their clothes and three times shoot arrows at the target from the running horses. When the ceremony is finished, they head for Watatsu Shrine. In front of the torii, the last arrow is shot into the sky. At the shrine, arrows (ya), fans (oogi), and amulets (shinsatsu) are distributed. These items are believed to drive off the kami of disease.

Yabusame rites takes place on May 5 at Sengen Taisha of Fujisan Honmiya, Fujimi City, Shizuoka Prefecture. The day before this the shrine buildings are decorated with irises (shōbu) and mugwort (yomogi) and there is a ceremony. The distinctive feature of this ceremony is the presentation of steamed sticky-rice wrapped in leaves (chimaki), bamboo shoots (takenoko), sweet arrowroot (amakuzu), shōbu, and yomogi as food offerings to the kami (shinsen). Once this is completed, priests (shinshoku) and archers together go pay respect to other branch shrines (sessha and massha) such as Massha Wakamiya Hachimangū, Wakanomiya Sengen Shrine, Kanenomiya Shrine, and Fuchi Shrine.

At that time, targets are set up in the shrine precincts (keidai) in front of the shrine and each archer performs yabusame with a single arrow. Then, they return to the horse riding ground at the main shrine and participate in the kannagake ceremony of test shooting. On the afternoon of the fifth, five horseback archers bring offerings and face questioning (toigyōji) to confirm their backgrounds. In yabusame, there are "okonai" and "hon'nori."
Okonai perform various archery styles such as bow holding (dakiyumi) or kokiyumi in front of the mounted archers. Furthermore, the archer demonstrates the form to shoot heaven and a form to shoot the earth. He then stops his horse and demonstrates the form to shoot an arrow at the front and back, right and left, and at the target itself. At the third form, he shoots at the target. The hon'nori follows with each archer shooting an arrow from a running horse. This shinji is believed to have begun in 1193 by Minamoto no Yoritomo who was hunting at the base of Mt. Fuji.

Yabusame takes place on April 15 at the first shrine (ichinomiya) of Nukisaki Shrine in Tomioka City, Gunma Prefecture. There are two mounted archers. The curtains are set up around the horse riding ground in front of the gate of the shrine precincts (keidai). Two targets are erected and archers shoot from running horses.

At Mononobe Jinja in Ōta City, Shimane Prefecture, there is a Yabusame ceremony that takes place on October 9 as part of the seasonal festival (reisai). On the afternoon of the day before, the street in front of the shrine becomes a horse riding area and three targets are prepared. Sand is spread and horses have a test run. This is called "showing the horse riding ground" (babamise). The day of the event, in the afternoon, after the traditional ceremony (koden matsuri) and the shrine-maiden's dance (mikomai), the person in charge that year (nenban) and caretakers raise a flag (nobori) and parade on horseback wearing either warrior outifits or old ceremonial clothing (kamishimo). They parade from the shrine around the town and then return to the shrine. This is called the "renewal of donations" (kifumono aratame). Next three horses perform yabusame in the precincts of the shrine (keidai). In addition, there is a ceremony called shinme hikiwatashi where the sacred horse (shinme) is walked back and forth three times in the main garden in front of the shrine.
- source : Mori Sakae, 2007, Kokugakuin 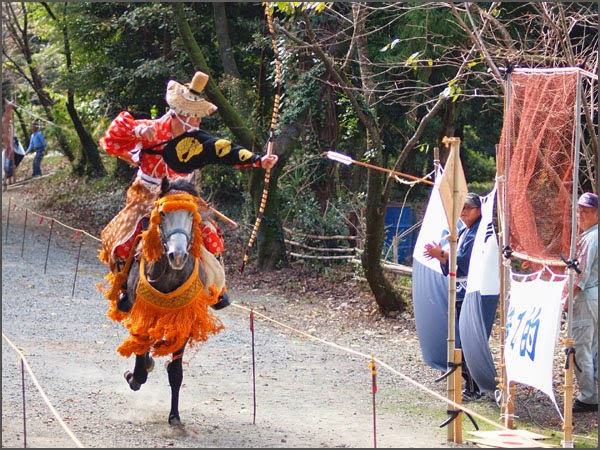 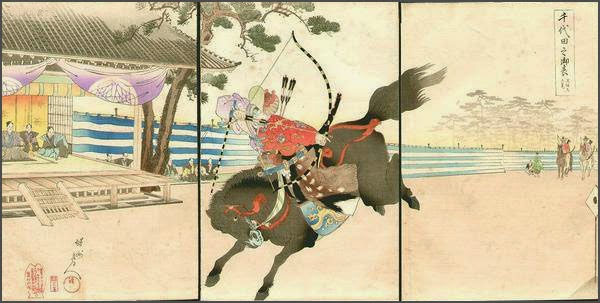 
- quote
Kasama Inari Jinja 笠間稲荷神社東京別社
The ceremonial yabusame observed at the Kasama Inari Jinja is dedicated both as a ritual of harvest divination - a subject with obvious and deep associations to the deity Inari Okami - and also as an element of Japanese culture. In order to preserve the ancient principles and techniques of the Ogasawara school - one of the two major styles of yabusame - a special equine training facility was built on the site of the old Kasama domain mounted archery grounds.

Shooters' Costumes
The yabusame rites held at the Kasama Inari Jinja are realized through the concerted participation and cooperation of large numbers of people. These include the shooters from the Ogasawara school of mounted archery, dressed in their meticulously recreated costumes, as well as members of the Kobudo Shinkokai (Society for the Promotion of old Martial Arts), parishioners of the Kasama Inari Jinja, and interested citizens, together with the mayor and police chief of the city of Kasama, who act as Grand Marshals (sobugyo) for the competition. Preceding the ritual, the participants gather before the shrine's Hall of Worship where they pray for a successful conclusion of the rites, after which they proceed in accordance with ancient precedent to the special equine archery grounds.

Nine groups from all of Japan participated in this meeting, the first of its kind. They discussed the problems of finding followers of this difficult art form. It is also difficult to find suitable horses. The brocade costumes of the riders are also problematic to keep and pay for.
Yabusame is practised from Aomori to Kyushu in about 120 places, much less that the summit participants had envisaged (about 200, they hoped).
Many of the local yabusame events had been stopped after WW2, and only revived after 1990 again, but many have probles finding fundings nowadays.
Some shrines have no proper training place and the villagers have to train in nearby fields.

The local yabusame at the shrine Izumo Iwai Jinja 出雲伊波比神社 has a history of 900 years. 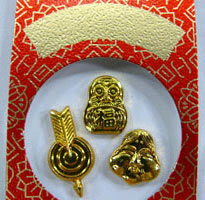 Amulet with Daruma, O-Tafuku and the hitting arrow.
Amulet to hit the target at Yabusame from OkuniTama Shrine 大国魂神社
. Atariya 当たり矢 arrow to hit good luck . 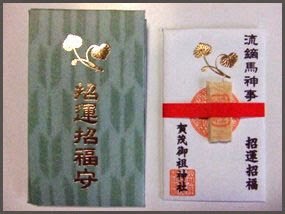 source : katzegatto.blog58.fc2.com
amulet from 下鴨神社にて「流鏑馬神事」 Kyoto, Aoi Festival
to bring you good luck while hitting the target of your life !

for yabusame
even the rain stops -
green starts to come out
Tr. Gabi Greve


. WKD : 緑立つ green starts to stand up .
kigo for spring 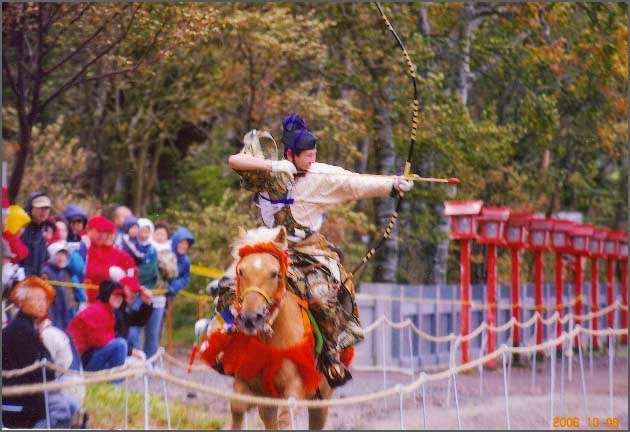