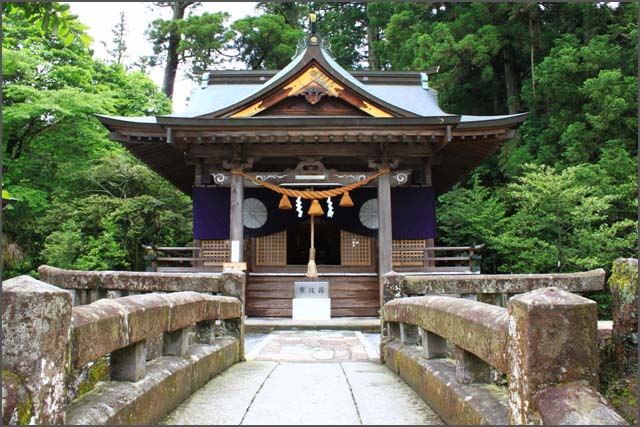 
- quote
Rokusho-Gu 六所宮
The shrine is known as "Rokusho-sama" or the respectful six gods and it now enshrines six Shinto gods.
The proper name is of the shrine is "Unagi-hime Jinja Shrine", but this lady god Unagi or Princess Eel is not included in the six gods.
People of Yufuin have been struggling with water. Our ancestors might have worshiped eel as a spirit of marshes and created this shrine.
Rokushogu use to have a fairly wide precincts and from there, trees were repeatedly cut down for special usages. A historical document records that in late 16th century, when Samurai lord "Otomo Yoshimune" ruled the area, the shrine offered the trees to built great "Yusuhara Hachiman Shrine", the first shrine of the Bungo area in Oita city.
In 1991, Super Typhoon Mireille knocked down all the huge cedars here and you can see the enshrined stumps now. 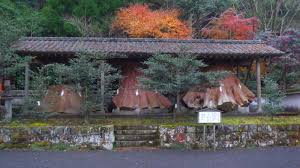 Ogo-Sha 大杵社 (Oogosha)
Ogo-sha is a subordinate of Unagi-hime Shrine and was established around the same period.
So it may go back to the age of mythological Emperor Keiko.
The great cedar tree of this shrine was designated as a national important cultural asset in 1934. It measures 13.5 m around the base and 35 m high and is more than 1000 years old.
Near the roots is a cavity around 5 m2. In the new year's eve of 1897, fire got into this cavity and it continued to burn for 2 years 2 month and 2 days. People say they saw smokes gashing out from the top part 30 m up in the sky.
Every body thought the tree was killed. However it gained power after this incident.
Maybe the pests were swept out by the fire and smoke.
- source : yufuin.or.jp/global

Lake Kinrinko 金鱗湖 Lake Fish Scales
Legend knows that Unagihime made a bet with an Oni demon that he could not build 100 steps up to her seat on the top of Mount Yufudake or make 100 boulder heaps (or throw 100 large boulders or earth in the area in one night ... sources differ).
Anyway then a rooster announced the morning and the job was not finished. The demon had to leave the area. But there was enough earth in the plain to make place for the farmers to grow crops and the lake had become much smaller. The lake Kinrinko used to be full of unagi ウナギ（鰻）eel, which were the sacred fish of the deity, and even made into the Deity Unagi Hime herself.

Other legends tell this story of Unagi Hime and the Oni named
Kesaki Gongen 蹴裂権現（けさきごんげん）
He tore a rift in the mountains so that the water of the huge lake could flow out . . . and thus the plain of Yufuin was created. 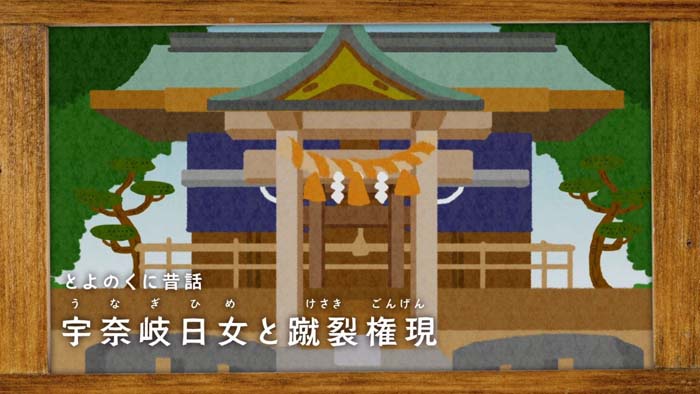 A statue of Kesaki Gongen is very small, only about as long as a hand.
It was kept in the shrine, but after the buildings were lost in a typhoon, there is now just a small sanctuary in the woods, where no-one visits any more.
A local villager takes the statue home to offer prayers during the winter time. He also shows it to the school children and tells them the old story.

Names referring to the first legendary emperor Jinmu.
The fourth child of Ugayafukiaezu and Tamayorihime (daughter of the sea kami Watatsumi; see also umi no kami). Jinmu originally married Ahirahime [in Nihongi, called Ahiratsuhime] in Hyuga, thus siring Tagishimimi no mikoto. Later, he conferred with Itsuse no mikoto and his other brothers and left on a campaign to subdue the eastern provinces. Both Kojiki and Nihongi relate the eastern campaign while interspersing martial songs called Kume-uta.

Hosted by Usatsuhiko and Usatsuhime, and guided by the kunitsukami Shinetsuhiko, the army passed through the provinces of Tsukushi, Toyo, Aki, and Kibi, finally arriving at Naniwa (near present-day Osaka). The army failed to land there, however, and changed course and proceeded instead to Kumano. During that period, the campaign was successful at subjugating the various tribes met, but in the fight with Tomi no Nagasunebiko (in Kojiki), Jinmu's brother Itsuse no mikoto was killed, and Inahi no mikoto (in Nihongi, Inai no mikoto) and Mikenu no mikoto (in Nihongi, Mikeirinu no mikoto) were buffeted by storms at sea and either drowned or departed to the "everlasting land" (Tokoyo), finally leaving Emperor Jinmu as the sole leader.

At Kumano, Jinmu's army was beset by noxious vapors issued by rough kami, and the entire band fell unconscious, but they were saved by the local man Takakuraji, who received an oracular dream from Amaterasu and Takemikazuchi. With the sword Futsu no mitama provided by Takemikazuchi, Jinmu defeated the rough kami.

When the army lost its way on the road, either Takamimusuhi (Kojiki) or Amaterasu (Nihongi) appeared to Jinmu in a dream, telling him to follow the numinous Yatakarasu crow that would be sent as a guide. Following the crow, Jinmu and his army, led by Michi no omi no mikoto arrived at Yoshino, where they were met by the kunitsukami Ihika (in Nihongi, called Ihikari), Iwaoshiwaku, and the child of Niemotsu. There, Jinmu orchestrated the surrender or defeat of the brothers Ukashi the Elder and Ukashi the Younger, the brothers Shiki the Elder and Shiki the Younger, the leaders Yasotakeru and Nagasunehiko, and the Tsuchigumo peoples.

Finally, in his role as the child of the heavenly kami (amatsukami), Jinmu consulted with Nigihayahi no mikoto who had rendered service in subduing local kami like Nagasunehiko, and after receiving Nigihayahi's submission, he completed his eastern campaign and built a palace at Kashihara, where he was coronated.

The account in Nihongi also introduces numerous other episodes involving the campaign to subject the indigenous tribes, including the appearance of a golden kite (a bird of prey); and Jinmu's receipt of an oracular dream, as the result of which he makes ritual implements from the clay of Mt. Amanokagu. These implements he offered in worship to Takamimusuhi in performance of an oath (ukei), appointing Michi no omi to the position of chief ceremonialist.

Following his coronation, Jinmu, through the mediation of Ōkume no mikoto, took as his empress Himetataraisukeyorihime, the child of Mishima no Ōmononushi and the daughter of Mishima no Mizokui. With her, he produced Kamununakawamimi no mikoto and other offspring, and at Torimiyama he constructed a facility for the worship of the imperial ancestral kami. According to Kojiki, he lived to be 127, and died at Kashihara and was buried to the north of the mountain Unebiyama.
- source : Mori Mizue, Kokugakuin 2005 - 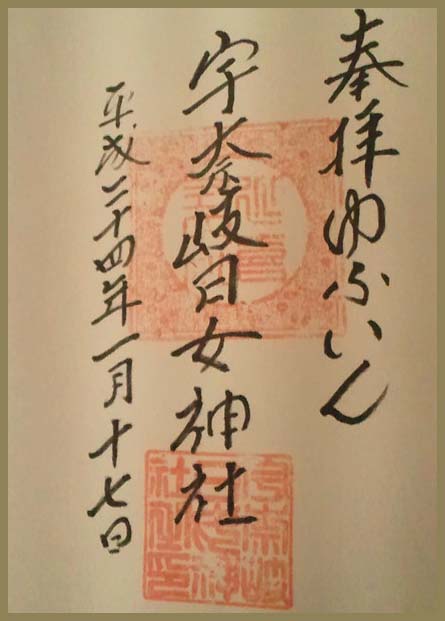 - quote -
Yufuin (由布院 as onsen resort, 湯布院 as city)
is a popular hot spring resort, located about ten kilometers inland from Beppu, another, much larger and more developed hot spring resort. Yufuin has a wealth of art museums, cafes and boutiques, and many travelers come to the city just to stroll about town for the day.

Yufuin is located on a flat river basin surrounded by mountains. The most prominent feature of Yufuin's skyline is the twin peaked Mount Yufu (由布岳 Yufudake), which hovers over the town and serves as the backdrop for many scenic views. The area is rural and shortly after leaving the main walking route, travelers will come across the rice paddies and farm houses that make up a considerable part of the town.

The ryokan and hotels of Yufuin are spread out around town, and not clustered along the main street like in many other resort towns. Instead, the main street is lined with cafes, boutiques and small museums, giving Yufuin an atmosphere more like a trendy shopping area than a traditional onsen town. Nonetheless, there is a large number of lodgings with hot spring baths, some of which open their baths to non-staying guests during daytime. 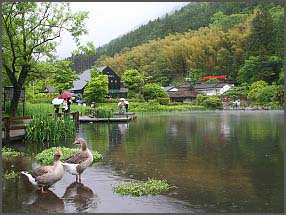 Another natural landmark of Yufuin besides Mount Yufu is Lake Kinrinko (金鱗湖) lit. "Golden Scale Lake".
The water temperature of this lake annually stays same, because of several brooks pouring in and hot spring gushes in the lake.
When the air temperature is lower than water temperature, you can see evaporating fog coming out of surface and the scene turns into a fantastic mood.
In this lake are fish such as tilapia (originated in Africa), crucian carp, carp and other freshwater fish. Legend say, Lake Kinrinko was much bigger in old days, but several landslides that occurred with earthquake made the lake smaller and shallower.
The lake was named by a Confucian scholar Kuso Mori in 1884, who saw the scales of crucian carp shine in gold. It literally means Golden scale Lake.

The small lake is located at the end of the town's main walking route, about a kilometer and a half from the station. Walking paths surround the lake as well as more small shops and cafes, and there is a small shrine located at the lake's southern end. There are also a few public bath houses, one of which, the Shitanyu, can be used by tourists, while the others are for use by local residents only.


The hot springs that abound in the town of Yufuin are divided into three distinct areas.

1. Yufuin Hot Springs (由布院温泉):
These springs are situated near the base of Mt. Yufu. Their plentiful flow of hot water and quiet mountain surroundings have long attracted writers and artists to the area. Currently, these springs are ranked with the second highest water flow in Japan, and their combination of natural environments with forward-thinking urban development have made Yufuin Hot Springs a top health resort destination, drawing visitors from all over Japan.

2．Yunohira Hot Springs (湯平温泉):
It has long been said that these springs are effective in treating gastrointestinal disorders. The nearby stone-paved road, built during the Edo period, suits the atmosphere of the Yunohira Hot Springs, with their history as therapeutic baths.
The Haiku Poet Santoka spent some time here.

3. Tsukahara Hot Springs (塚原温泉):
It is said that this secluded spring located north of Mt. Yufu has been flowing since the Heian period. Tsukahara Hot Spring is recognized as one of the three major medicinal baths of Japan, and its strong acidic pH of 1.4 is reputed to be especially effective against skin diseases.
- source : jnto.go.jp/eng/location -

you welcome us
with a white makeup -
Mount Yufudake
source : shikata.exblog.jp 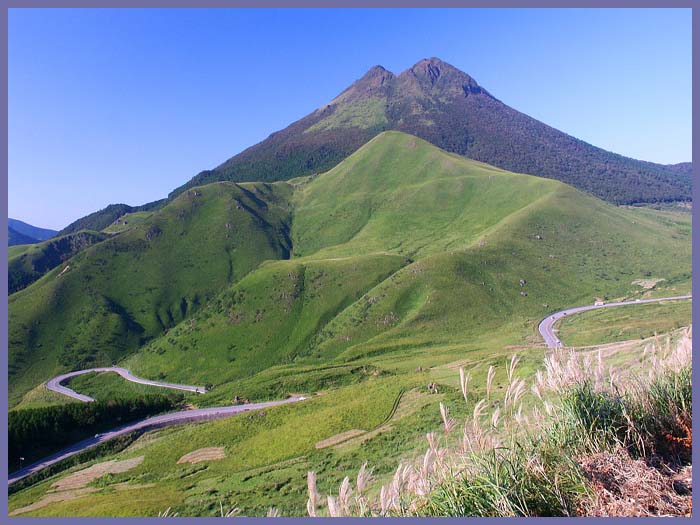