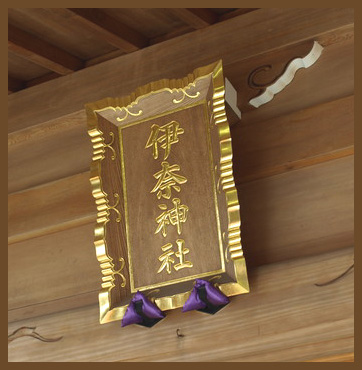 The shrine is in honor of
Ina Hanzaemon Tadanobu 伊奈半左衛門忠順

After the great earthquake in November 1707, only 49 days later, there was a huge eruption of Mount Fuji which devastated a huge area around Gotemba, the lava gravel flying even up to the town of Edo.

In the village of Subashiri 須走 more than 3.50 meters of lava gravel, cinder, ash and scoria covered the earth.
Homes and forests burned down, the fields were lost under the ashes.

The Bakufu government in Edo collected extra tax contributions for the reconstruction of the region, but a lot of that money went into other channels - building new quarters in the Harem of Edo Castle (Ooku 大奥), entertaining a delegation from Korea and so on. 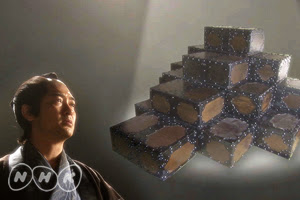 Hanzaemon was appointed Magistrate of the Reconstruction, but got only a very small portion of all that money.

He hired the local farmers for hard labour and payed them a small fee to survive.

After clearing the rivers, they all helped out to remove the lava gravel from the fields.
Just shoveling to the side would not do, since huge piles of lava on the four sides were hindering the normal field work and reduced the open space drastically.
So they began to "turn the earth upside down", (tenchigaeshi 天地返し . turning heaven and earth upside down), a kind of very deep ploughing.
After first digging a huge deep hole, they moved part of the nearby lava gravel into the hole, covering the last 70 cm with fresh earth appearing below the lava.
The new hole was first filled with lava, then covered with the dug-up earth.
And so on digging holes side by side. . . to be seen to our day in a museum part.

To feed the starving farmers after more than two years of hardship and not much support from the Bakufu government, Hanzaemon finally decided to open the rice storage of the Bakufu and distributed the food to the poor.
To pay for this "crime", he had to commit seppuku suicide, or so the legend tells us.

The villagers built the first small shrine to honor him in 1867.

The children of Subashiri village perform a simple drama at the local school to our day, recalling the hardships of their ancestors and helping hand of Hanzaemon.
- Reference : NHK Historia - 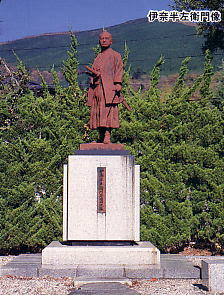 Statue of Hanzaemon at Ina shrine .
It was moved here from Gotenba in 1989, made by 堤達男氏.

The main festival of the shrine is in Spring and Autumn.
source : kansubasiri/inajinja.htm


Ina Hanzaemon had been working for the Edo Bakufu government,
supervising the building of the Eitai Bridge in 1698 永代橋.
the land reclaiming efforts around Fukagawa in 1700 深川埋め立て
building a dam in Edo Honjo in 1704 江戸本所堤防
waterway regulation of the Asakusa River in 1705 浅草川治水

When Mount Fuji erupted he was maybe the only person with such a wide range of experience and was sent to the region as a bugyoo 奉行 magistrate.

sunayoke kawazarai bugyoo 砂除川浚奉行 magistrate to clean the rivers.
to get the vulcanic debris out of the riverbed before the rainy season started and overflowing would threaten the land beyond. Cleaning a riverbed was followed by strengthening the dams and river banks to avoid flooding.
In the region, more than 60 villages had already been given up by the local government and the villagers had to fight for themselves to survive in the rubble.

Mount Fuji - Hōei eruption 宝永
The latest eruption, in 1707 (the 4th year of the Hōei era), was known as the great Hōei eruption. It followed several weeks after the Great Hōei earthquake:

November 11, 1707 (Hōei 4, 14th day of the 10th month):
The city of Osaka suffers tremendously because of a very violent earthquake.

December 16, 1707 (Hōei 4, 23nd day of the 11th month):
An eruption of Mt. Fuji; the cinders and ash fell like rain in Izu, Kai, Sagami, and Musashi. This eruption was remarkable in that it spread a vast amount of volcanic ash and scoria over a region as far away as Edo. 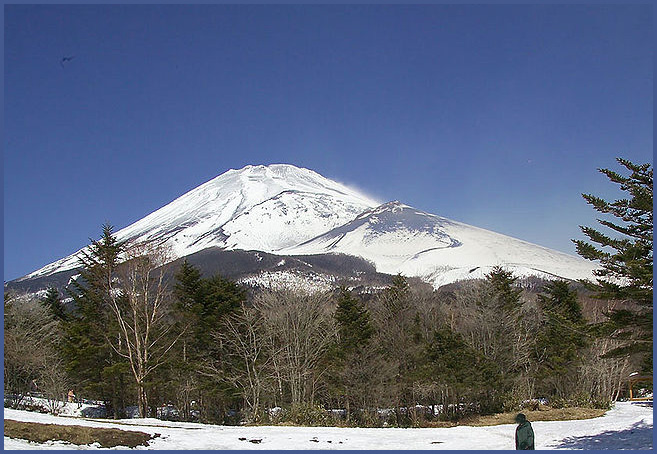 Records of eruption
Sixteen eruptions of New Fuji have been recorded since 781. Many of the eruptions occurred in the Heian era, with twelve eruptions between 800 and 1083. Sometimes inactive periods between eruptions lasted for hundreds of years, as in the period between 1083 and 1511, when no eruptions were recorded for over 400 years. At present, there have been no eruptions since the Hoei eruption in 1707-1708, around 300 years ago.

Following the 2011 Tōhoku earthquake and tsunami much attention was given to the volcanic reaction of Mt. Fuji. Experts have found that the internal pressure of the Mt. Fuji Lava Chamber has increased to 1.6 megapascals.
© More in the WIKIPEDIA !

tales of old
to inspire the next generation -
Earthquake Country

tenchigaeshi - maybe a method to cope with the salty fields in the Tohoku region after the huge tsunami?

. Kaido 街道 The Highways of Japan . 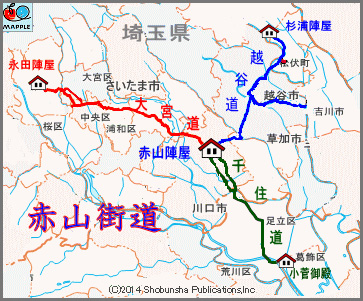 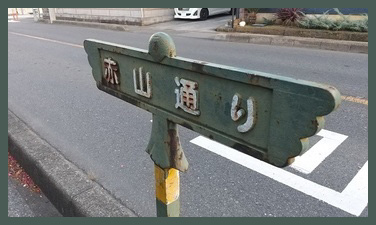