"Shrine of the dried pine tree" 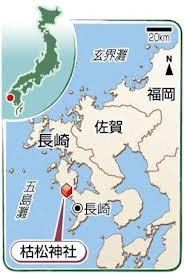 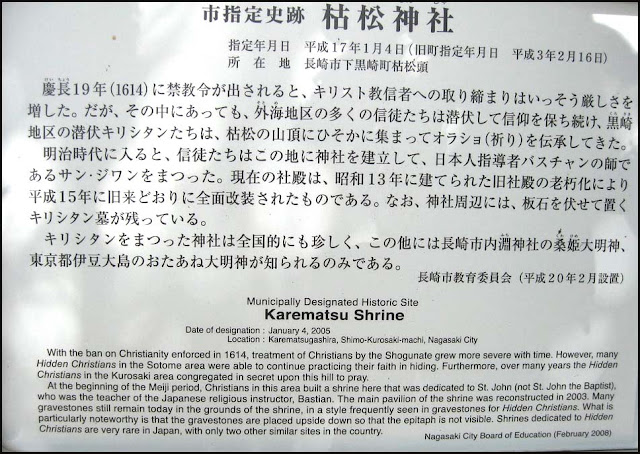 One of only three Hidden Christian Shinto shrines in Japan.
It's at Sotome, about 20 minutes from Nagasaki and the setting for Endo Shusaku's 'Silence'. The shrine was erected by Hidden Christians as 'camouflage' to disguise their worship of a martyr's grave.
It's a rare instance of a 'jinja' with no torii, and of a 'jinja' that honours a foreigner.
source : vikingslav photos 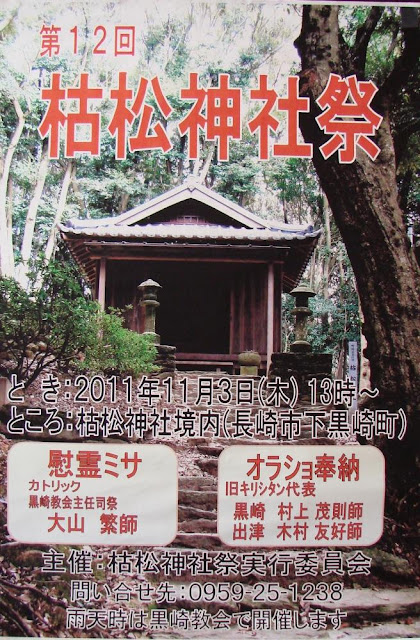 There are three clans descending from the "Hidden Christian" period after the Meiji restauration in this region:

One clan opted to become Buddhist (with a "Maria Kannon"),
one clan adapted to a Shinto shrine and
one clan stayed "hidden" as Christians (like the Murakami family)

Once a year these three clans come together to celebrate their religion at this shrine.

The shrine is close to the church Kurosaki Kyookai 黒崎教会.

The father of the present Murakami 村上茂則 turned to Catholicism shortly before his death, because he wanted a proper burial ceremony. 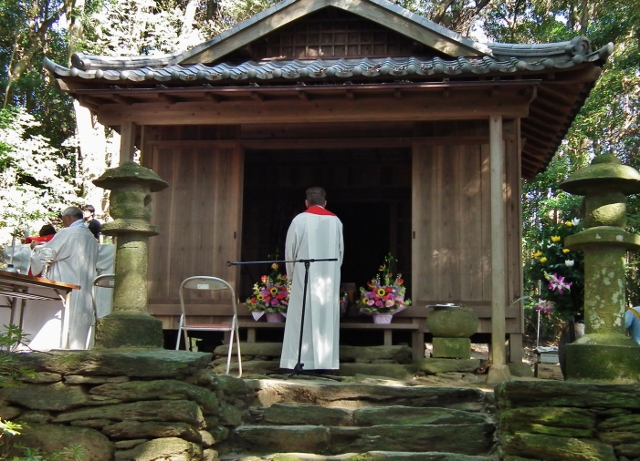 quote
Hidden Christians
In ‘camouflaging’ their religion, the Hidden Christians used many practices associated with Shinto. Obvious examples would be their use of shrines as cover for their prayers. The most famous instance is Karematsu Jinja at Sotome, where a Christian martyr called San Jiwan is buried.
It’s the area in which Endo Shusaku chose to set his novel on Hidden Christians, Silence (1966).

To avoid suspicion, veneration of San Jiwan was camouflaged as worship of a kami. It made good sense, since the hill is of the wooded type often celebrated in Shinto. Even in modern times, when the need for subterfuge had long passed, the honoring of San Jiwan continued in Shinto style as if entirely natural.

Until the 1930s there was a small shrine (hokora), where soldiers going off to war would pay respects, then in the late 1930s a building was erected (which was reconstructed in 2002). It is a rare instance of a Shinto-style shrine with no torii. Inside are pieces of the original pine trees, and a grave with an inscription to San Jiwan, pappa confesoru—a faux Latin tribute to the priest-confessor. 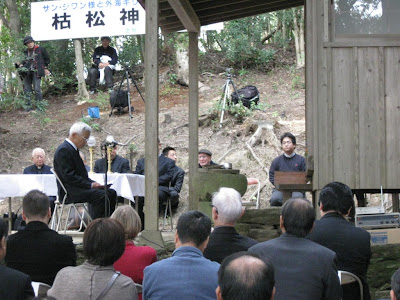 A present-day "Hidden Christian" reading orashio (prayers) at an interfaith ceremony at Karematsu in 2010. The prayers were handed down orally for seven generations and in many cases the original wording was badly corrupted as a result. 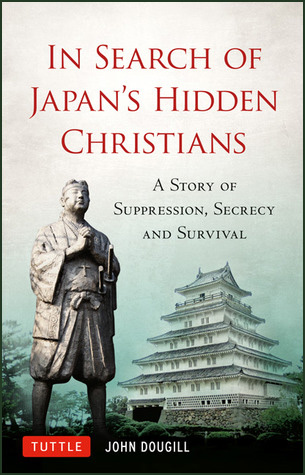 From the time the first Christian missionary arrived in Japan in 1549 to when a nationwide ban was issued in 1614, over 300,000 Japanese were converted to Christianity. A vicious campaign of persecution forced the faithful to go underground. For seven generations, Hidden Christians —or Kirishitan— preserved a faith that was strictly forbidden on pain of death. Illiterate peasants handed down the Catholicism that had been taught to their ancestors despite having no Bible or contact with the outside world. Just as remarkably, descendants of the Hidden Christians continue to this day to practice their own religion, refusing to rejoin the Catholic Church. Why? And what is it about Christianity that is so antagonistic to Japanese culture?
In Search of Japan's Hidden Christians is an attempt to answer these questions.
A journey in both space and time, In Search of Japan's Hidden Christians recounts a clash of civilizations —of East and West— that resonates to this day, and offers insights about the tenacity of belief and unchanging aspects of Japanese culture.
source : www.goodreads.com/book


quote
The Karematsu shrine continues to be greatly honoured, but there are certain unusual features about it ...
Bastian sama and Juan
The Kakure Kirishitan of Japan by Stephen Turnbull
source : books.google.co.jp


"Turnbull starts out by explaining that the Jesuits continued to print a Church calendar (using Western dates) in Japan every year until 1618. After that, they were smuggled in from Macao until 1634. The 1634 version was called 'Bastian no Higuri' (the calendar of Bastian, a 1659 Martyr) based on a story of Bastian getting a vision of his master San Juan-sama who passed on knowledge of the calendar to him. So, even though crediting it to Bastian is likely false, it became known as the calendar of Bastian-sama and was the basis for all the known versions of Kakure Kirishitan calendars. There are copies extant confiscated in 1787 by the Nagasaki magistrate among others.

There were two main communities of hidden Christians-those who considered the preservation of Holy Relics (nandogami) to be most important (mainly in north Nagasaki, Hirado, and Ikitsuki) and those who considered the preservation of the church calendar to be the guiding light (south Nagasaki and Sotome/Goto). French Missionaries in 1865 made contact with the latter. it seems the leader of the largest group is known as the Chokata (register official) and his main duty is converting the Bastian Calendar to Japanese lunar dates. Turnbull's description sounds much like the visual calendar Bethetsu posted, with work days, feast days, days of rest, days to perform certain tasks, days of abstinence, etc etc etc. So the calendar was obviously very important to the Kakure Kirishitan.

Turnbull goes on to describe the lunar calendar the Japanese derived from the Bastian calendar. It's still used today by the surviving handful of Kakure Kirishitan groups for religious purposes (except they do celebrate New Years eve on December 31, along with a handful of other days linked to New Years). Each group used a slightly different calendar depending on what type of local martyrs were celebrated-usually noting 27 to 31 special days. There are calendars from Tsuji, Ikitsuki, Sakaime, Ichibu, and a few other groups. The Ikitsuki calendar lists 31 days. I don't want to list them all, but many seem to be Shinto based and have little to do with Catholic religious holidays as I understand them-there's 'Safety of cattle' day, house purification, founder of the group, Children's Festival, making omaburi, recently dead, 40th-10th-3rd day prayers, prayers for worldly matters, local martyrs, midsummer gathering, etc etc etc. Obviously, the days that the non-New Years holidays are celebrated on change yearly vis-a-vis the Western calendar, although they don't change on the lunar calendar."
by Tatsunoshi

Martyrs and Matsuri:
The massacre of the hidden Christians of Ikitsuki in 1645 and its relationship to local Shintō tradition
source : www.tandfonline.com 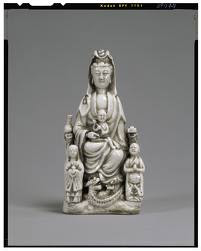 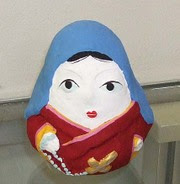 Pictures of Christian figures used during the Edo period (1600-1868) to identify adherents of Christianity, proscribed in 1613. Suspects were ordered to trample these Christian images underfoot on the assumption that those who refused or hesitated revealed themselves as Christians.
. Fumie 踏絵, 踏み絵 Stepping on a Christian image . 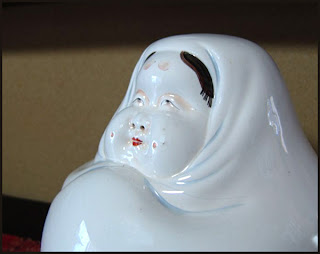