lit. "first shrine". The most prominent shrine in each province.
The shrine usually has a different name too.


quote
Ichinomiya, (literally first shrine) is a shrine occupying the highest rank among the shrines of a province. A sōja is the shrine established in each province which collectively enshrines all of the deities being worshipped at other shrines within the province.

Sōja was originally a generic term for a "combined shrine" where all the kami within a region were collectively enshrined. Such shrines were established not only by the provincial government but also at temples, shōen (manors), and family residences. However, when discussed alongside ichinomiya, sōja ordinarily refers to a provincial combined shrine.

Both types of shrine emerged during the latter half of the Heian period, and both ichinomiya and sōja occupied central positions among provincial shrines in the late Heian and medieval periods. In the Heian period, provincial governors (kokushi) began a precedent of worshipping at the prominent shrines of their assigned provinces. The kokushi was also responsible for the management of shrines within his province and and for their performance of ritual observances. The kokushi offered heihaku and conducted other ritual procedures as the occasion demanded. Ichinomiya are thought to have originated from the classification and ranking of shrines within a province to facilitate the provincial governor's execution of such ritual duties.

Another theory believes that the provincial governors probably gave official sanction to shrine rankings that had occurred naturally and spontaneously within each province, rather than having taken the initiative to establish such rankings themselves. In any case, the classification of ichinomiya followed by ninomiya 二の宮 (second shrine) and sannomiya 三の宮 (third shrine) functioned as a quasi-official ranking of shrines. This ranking did not always remain fixed; in some cases, fluctuations in the relative power of shrines resulted in shifts in their ranking.

The first mention of sōja in the historical record is the reference to Inaba sōja in the entry for the 15th day of the second month of 1099 in the Tokinoriki (The Diary of Taira-no-Tokinori, also called the Jihanki). According to "Records of Hakusan" (Hakusan-no-ki), the sōja of Kaga province was first established by the Kaga provincial governor who enshrined the kami of the province's main shrines in one place to ease the labor of traveling to worship at the province's various shrines. Although this labor-saving notion is also said to have accounted for the foundation of other sōja, some question whether this is the sole factor.

A sōja could consist of either a new shrine established near or inside the "provincial admininstrative offices" (kokufu) or an existing shrine newly designated as a sōja. In the latter case, the ichinomiya sometimes doubled as the sōja.

The sōja frequently served as the venue for ritual procedures involving the kokuga (the office of the kokushi) such as the ceremony of the installment of a newly appointed governor. Furthermore, the sōja is deeply connected to the province's ichinomiya and other prominent shrines; for example, it became customary to conduct rites at the sōja in advance of worshipping and offering heihaku at the ichinomiya and other shrines.

Based on such characteristics, ichinomiya and sōja are thought to have emerged from the late Heian to medieval periods during the process of establishing the provincial shrine system. Through the kokuga rituals performed there, it is thought that there were intended to serve as the spiritual centers for both the local bureaucrats (zaichō-no-kan-nin) and land-owning class (kokujin).

Unlike the provincial governor, who was dispatched from the Heian capital, the zaichō-no-kan-nin were local residents working as officials in the kokuga, and the kokujin were local landowners. In addition, the latter half of the eleventh century — when ichinomiya and sōja were being formed in the provinces — coincided with the near completion of the "Twenty-Two Shrine System" (Nijūnishasei) in the Kinki region.

Due to this fact, some scholars view ichinomiya, sōja, and the "Twenty-Two Shrines" as having all appeared due to similar trends toward integrating kansha (government shrines).
Note also that sōja (総社) can also written using other characters, such as 惣社 and 奏社.
Moreover, even today, many shrines around Japan bear the name of ichinomiya or sōja. There are also examples where these terms have become toponyms, including Ichinomiya City in Aichi Prefecture, Kazusa-Ichinomiya in Chiba Prefecture, and Sōja City in Okayama Prefecture.
source : Namiki Kazuko, Kokugakuin 2007 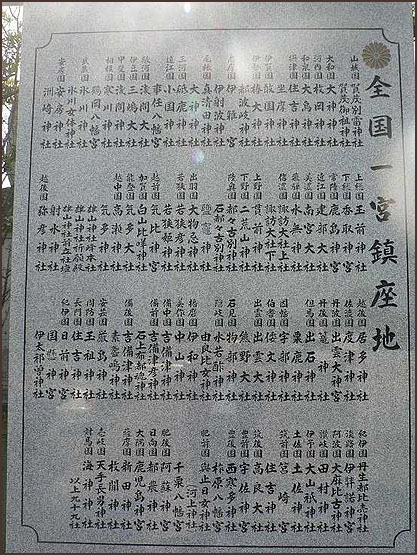 When prefectures were established in the Meiji period, the old system of provincial ichinomiya was not changed. Each new prefecture had one or more ichinomiya.
List of shrines :
© More in the WIKIPEDIA !


Temari uta is a song that Japanese children sing to count while bouncing or catching a small ball ten times, each time saying the name of a deity or famous temple or shrine.

first of all there is Ichi no Miya is the first line. 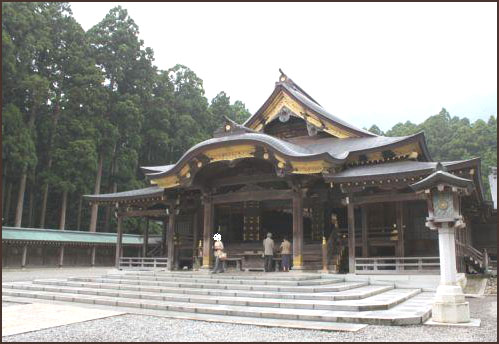 降る雪の卍と越後一の宮
furu yuki no manji to Echigo Ichi no Miya 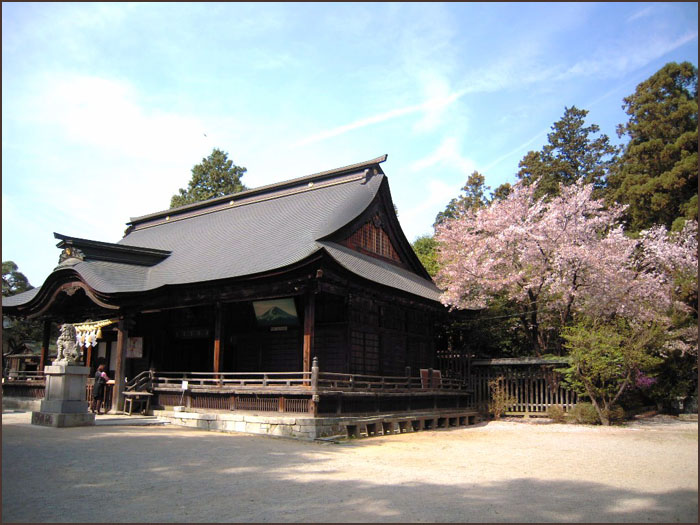 
. fukurokake 袋掛 "packing fruit in paper bags" .
kigo for all summer
bagging apples, peaches and other fruit into bags to protect them from insects and the summer rain.

The city of Omiya 大宮 "great Shrine" is named after this shrine. The access road from the first Torii gate to the shrine is about 2 km long!
And the many buildings in the compound are overwhelming. 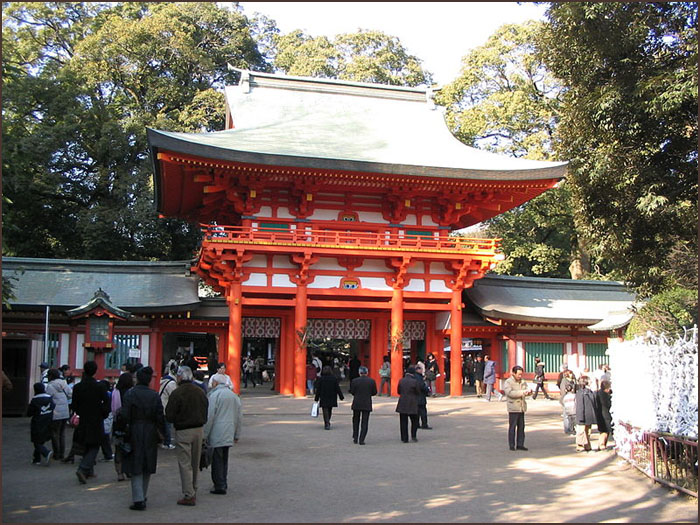 ..... the shrine was established during the reign of Emperor Kōshō in 473 BC.
The district of Omiya, literally "Great Shrine", derives from the special favor shown by Emperor Meiji, who raised Hikawa above all other shrines in the Kantō region.
Surrounding the shrine is a large park in which there are many cherry blossom trees, a zoo and a museum.
This main shrine has 59 branch shrines in Tokyo and 162 branch shrines in Saitama Prefecture.
As many as 290 daughter shrines exist across Japan, all named "Hikawa". ...
- - - More in the WIKIPEDIA !

This shrine is famous for its amulets for ENMUSUBI, finding a good partner or binding and bonding of any kind. 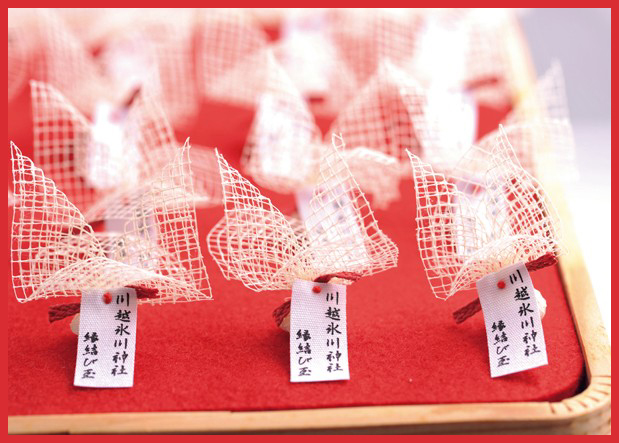 In a special inner garden there are white sacred pebbles. Every morning 20 are selected, wrapped in white pure hemp bags and sold on this day.
The shrine has also a lot of other amulets,
. . . CLICK here for more Photos  !

pines in winter and
moonlight on Musashi
Ichi no Miya shrine

black swallowtail -
sumo wrestling at the shrine
of Musashi 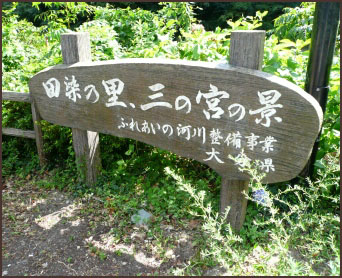 
Here it is the name of a beautiful lady. Onna Sannomiya 女三宮, the legal wife of Hikaru Genji. 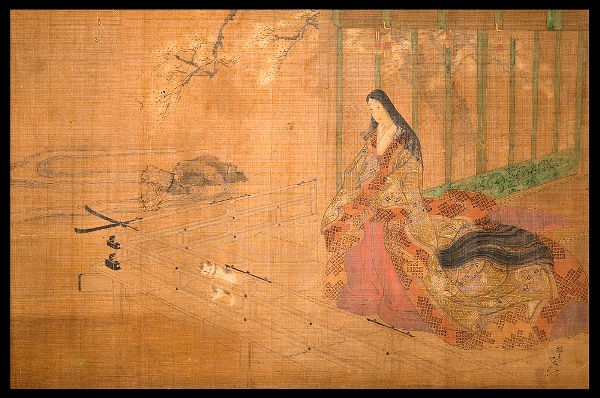 Pilgrimage Record to the Ichinomiya Shrines. Travel account. This work is an account by the early Edo period Shintō scholar Tachibana Mitsuyoshi of his travels on a twenty-three-year pilgrimage to the Ichinomiya (most prominent shrine in each province) shrines between 1675 and 1697. The work is said originally to have existed in thirteen fascicles, but the version now extant is in two fascicles, consisting of an abridged edition written in 1722 by the Suika Shintō scholar Okada Masatoshi, and entitled Ichinomiya junkei ki bassui (Excerpts from the Pilgrimage Record to the Ichinomiya Shrines). The work includes Mitsuyoshi's personal observations on his pilgrimages (sankei 参詣), together with documents and illustrations on the Ichinomiya shrines themselves. Included in Jingi zensho, vol. 2 (Kōten Kōkyūjo, 1907).
.
http://eos.kokugakuin.ac.jp/modules/xwords/entry.php?entryID=1324
.