During the Heian period, the deity to protect the country from evil was enshrined in this shrine. It was located in the South of the capital, and its deity is famous for protecting the "four courners".
Fushimi, Kyoto - 京都市伏見区中島鳥羽離宮町 ７

This shrine is famous for its various festivals according to old tradtions.

quote
Jonan-gu
is in the area that was under the peaceful rule of Emperor Toba.
It was a strategic gateway to the ancient capital of Heian-kyo (now Kyoto). It was also a beautiful riverside scenic spot on the Kamogawa River.
... Thus, it was seen as a prosperous sub-capital at the heart of culture and government over a period spanning more than 150 years of the emperors and ex-emperors.

Before departing on their pilgrimages, the nobility prayed for safe journey along the way as well as purifying themselves by abstaining from eating meat. In particular, the Ex-emperors, Shirakawa and Toba often chose Jonan-gu as a spiritual place to start their pilgrimages to Kumano. They would seclude themselves and do purificiation rites for seven days before departing on the pilgrimage of devotion which took a full month for the roundtrip. In those times, many people chose Jonan-gu because it impressed people with its lodgings, and it was believed that Jonan-gu was a suitable place to start from for a religious journey.
source : 99oji.blogspot.jp 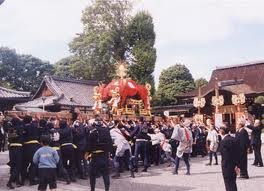 This shrine is also called Mahataki Jinja 真幡寸神社.
On the festival day three mikoshi portable shrines decorated with Pine, Bamboo and Plum (Shoochikubai) are carried around in a large procession in the evening.
In former times there were also horse races and shooting competitions (Jonan yabusame). 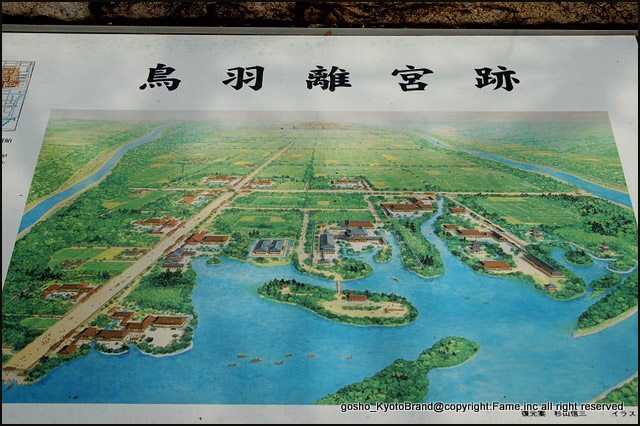 
quote
Buson, one of the great poets of haiku of the late eighteenth century, was in fact very much a studio or desk poet. He composed his poetry at home, in his study, and he often wrote about other worlds, particularly the tenth and eleventh century Heian aristocratic world and the subsequent medieval period. One of his most famous historical poems is

probably composed in 1776.
Toba palace, which immediately sets this in the Heian or early medieval period, was an imperial villa that the Cloistered Emperor Shirakawa (1053 - 1129) constructed near Kyoto in the eleventh century and that subsequently became the location of a number of political and military conspiracies. The galloping horsemen are probably warriors on some emergency mission - a sense of turmoil and urgency embodied in the season word of autumn tempest (nowaki).
An American equivalent might be something like the Confederate cavalry at Gettysburg during the Civil War or the militia at Lexington during the American revolution. The hokku creates a powerful atmosphere and a larger sense of narrative, like a scene from a medieval military epic or from a picture scroll.
source : Haruo Shirane - Beyond the Haiku Moment

quote
To the Toba Imperial villa,
Hurrying five or six mounted warriors
In a typhoon of early autumn.

Nobody reads the Haiku without picturing a scene in his mind readily. The Haiku has three elements that arouse our sense of weirdness, uneasiness, and gloomy foreboding.
One is 'Tobadono', which stands for government by a retired emperor, with the possibility of political disturbance.
Another is 'mounted warriors', which represents a disquieting behavior or a riot.
The last is 'a typhoon in the early autumn', in which the first two climax as psychological suggestion of political turmoil, or a civil war. Besides, an autumnal typhoon is associated with a long severe winter.
Here in this respect, there is no substitute of the season word for 'a typhoon in the early autumn'. In the Haiku, fiction plays a very important role, but many agree that it ranks among his best haiku poems.
source : www.hokuoto77.com


To Toba's Hall
five or six horsemen hurry hard --
a storm-wind of the fall!
Tr. Henderson


To the castle of Toba
five or six horses hurrying
in the autumn storm
Tr. Sawa and Shiffert

The cut marker KANA is at the end of line 3.

after composing linked verse
on the way home at Toba
the frogs . . .
Tr. Gabi Greve

The cut marker KANA is at the end of line 3. 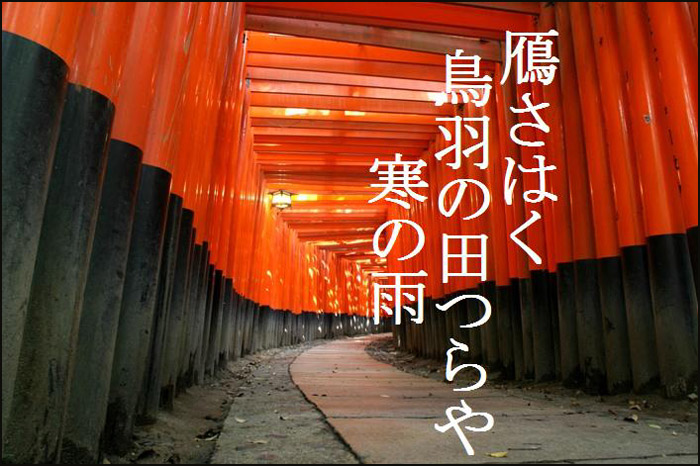