this coolness !
Kami and Buddhas
side by side

The discussion started from here:
. WKD : kami to hotoke . 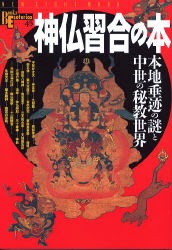 shinbutsu shūgō 神仏習合 Shin Butsu Shugo - syncretism of Shinto and Buddhism
A wide variety of titles have come into use in accordance with the unique characteristics of kami, and as a result of historical changes in the way kami have been understood. In the ancient period, the title mikoto was used, while expressions such as myōjin ("shining kami"), daibosatsu (great bodhisattva), and gongen (avatar) came into use as a product of kami-buddha combinatory cults (shinbutsu shūgō).
During the Edo period, the title reisha ("spirit shrine") was applied to the departed spirits of human beings.
. 神仏 － read the details HERE . 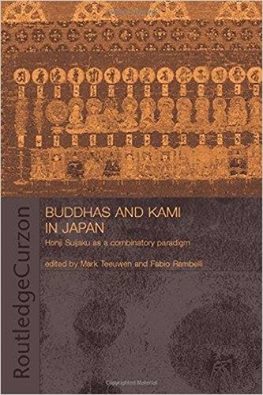 Buddhas and Kami in Japan: Honji Suijaku as a Combinatory Paradigm
by Fabio Rambelli (Editor), Mark Teeuwen (Editor)
This volume offers a multidisciplinary approach to the combinatory tradition that dominated premodern and early modern Japanese religion, known as honji suijaku (originals and their traces). It questions received, simplified accounts of the interactions between Shinto and Japanese Buddhism, and presents a more dynamic and variegated religious world, one in which the deities' Buddhist originals and local traces did not constitute one-to-one associations, but complex combinations of multiple deities based on semiotic operations, doctrines, myths, and legends. The book's essays, all based on specific case studies, discuss the honji suijaku paradigm from a number of different perspectives, always integrating historical and doctrinal analysis with interpretive insights.
- quote - amazon com -

- quote
Shinbutsu Bunri 神仏分離
The separation of Shinto and Buddhism.
A series of administrative measures implemented by the Meiji government, designed to prohibit the shinbutsu shūgō (the systemic combination of kami and buddhas, shrines and temples, and their priesthoods) system that had its roots in the Nara Period (710-94). Buddhism, which arrived in Japan in the sixth century, steadily combined with Shinto until the emergence in the medieval period of the honji suijaku theory (the idea that kami were trace manifestations of "original" bodhisattvas) which came to constitute what one might call "Japanese religion."

In other words, there now began to proliferate across Japan the erection of temples within shrine compounds (jingūji), the practice of sutra reading at shrines, the application of the term "bodhisattva" to kami, and the celebration of rites at shrines by bettō or shasō (priests wearing Buddhist garb). Apart from Ise Jingū and a few other exceptions, most shrines were placed under Buddhist control. The combinatory dimension of shrines in the Hachiman and Gion lineages, which from the outset had a thick Buddhist coloration, was even more pronounced. Many were sites that were no longer distinguishable as either Buddhist temple or Shinto shrine.

In response to this situation, anti-Buddhist thought strengthened in the early modern period under the influence of Confucianism and kokugaku (National Learning, nativism). Kokugaku thinkers and shrine priests (shinshoku) began to call fervently for a return of shrines to their original form. The Restoration government, which came to power in 1868 proclaiming a "return to imperial rule" (ōsei fukko) and a political transformation that claimed the same creative state-founding legitimacy as that held by the mythological first emperor Jinmu (jinmu sōgyō), put the theory into practice and endeavored to clarify the distinction between shrines and temples. On the seventeenth day of the third month of that year, the government issued the "separation edicts" and ordered the defrocking of the bettō and shasō.
This was the first stage of shinbutsu bunri.

The second stage began on the twenty-eighth, when the government banned the application of Buddhist terminology such as gongen (avatar) to kami, and the veneration of Buddhist statues as the shintai (the sacred presence or enshrined deity) at shrines.

The beginning of the third stage was marked by the promulgation of orders on the twenty-fourth day of the fourth month banning the application of the Buddhist term "Daibosatsu" to Hachiman at Iwashimizu Hachimangū and Usa Hachimangū (presently Usa Jingū). Hachiman was henceforth to be known as Hachiman Daijin.

Finally, on the fourth day of the fourth intercalary month, all the defrocked bettō and shasō were instructed to restyle themselves as "shrine priests" (kannushi) and to resume shrine service. Those who refused on the grounds of their Buddhist beliefs were ordered to leave their shrines. At the same time, orders were issued to the Nichiren (Buddhist) Sect to desist from referring to the sanjū banshin (Thirty Protective Tutelary [Lotus] Deities) as kami.

As a result of these measures, all shades of Buddhism were eliminated from shrines across Japan. There were shrine priests, nativists and local government officials who interpreted these regulations as implying that Buddhism should be destroyed (this event was known in Japanese as haibutsu kishaku, which literally means "abandon Buddhism and throw out Shakyamuni [the historical Buddha]") and embarked on an extreme anti-Buddhist campaign.

This prompted central government to strictly instruct shrine priests that the separation of the two was to be conducted with utmost care, and that the intention was not the destruction of Buddhism. However, central government instructions had little impact until the abolition of the domains in 1871. Local government officials were still relatively powerful and, steeped as they were in Confucian thinking, they promoted anti-Buddhist policies across Japan in response to the separation regulations.
The result was the destruction of many temples and Buddhist treasures.
source : Sakamoto Koremaru , Kokugakuin 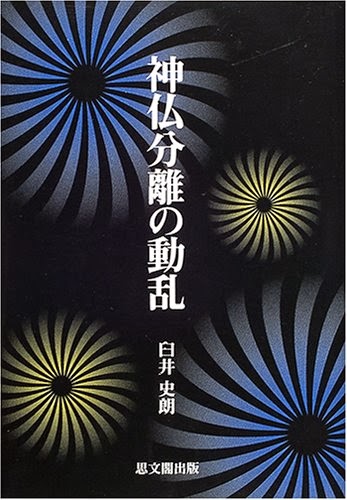 
- quote -
Haibutsu kishaku (廃仏毀釈)
(literally "abolish Buddhism and destroy Shākyamuni")
is a term that indicates a current of thought continuous in Japan's history which advocates the expulsion of Buddhism from Japan. More narrowly, it also indicates a particular historic movement and specific historic events based on that ideology which, during the Meiji Restoration, produced the destruction of Buddhist temples, images and texts, and the forced return to secular life of Buddhist monks.

An early example of haibutsu kishaku
is the Mononobe clan's anti-Buddhist policies during the Kofun period. The Mononobe were opposed to the spread of Buddhism not on religious grounds, but rather because of nationalism and xenophobia. The Nakatomi clan, ancestors of the Fujiwara, were allies of the Mononobe in their opposition to Buddhism.

Another example is the policies of temple closure and monk defrocking of the Okayama, Aizu, and Mito Domains, also adopted for political and economic, rather than religious, reasons during the early modern period. These domainal policies were in general based on Confucian anti-Buddhist thought. The Meiji period form of haibutsu kishaku, based on kokugaku and Shinto-centrism, was instead dictated by a desire to distinguish between foreign Buddhism and a purely Japanese Shinto.
- Haibutsu kishaku during the Meiji Restoration
- - - More in the WIKIPEDIA !

In the Daido era (806-809), Kobo Daishi enshrined Amida Buddha、which was Honjibutsu (Buddhist counterpart of the deity of the shrine) and designated the shrine as the 68th of the 88 Holy Sites of Shikoku.
. . . when temples and shrines were separated according to the Shinbutsu Bunri policy of the national government, Honjibutsu Amida Buddha of Kotohiki Hachimangu Shrine was removed to Nishi-Kondo Hall of Kannonji Temple, which became the main hall of Jin’nein Temple; . . .


During the process of separation of Shinto and Buddhist objects of worship, the deity Myoken (the north star) was changed to Amenominakanushi 天之御中主神 at many shrines.


The Invention of Religion in Japan
Jason Ananda Josephson 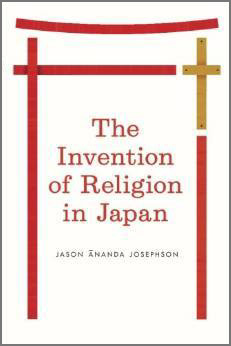 Throughout its long history, Japan had no concept of what we call "religion." There was no corresponding Japanese word, nor anything close to its meaning. But when American warships appeared off the coast of Japan in 1853 and forced the Japanese government to sign treaties demanding, among other things, freedom of religion, the country had to contend with this Western idea. In this book, Jason Ānanda Josephson reveals how Japanese officials invented religion in Japan and traces the sweeping intellectual, legal, and cultural changes that followed.

More than a tale of oppression or hegemony, Josephson's account demonstrates that the process of articulating religion offered the Japanese state a valuable opportunity. In addition to carving out space for belief in Christianity and certain forms of Buddhism, Japanese officials excluded Shinto from the category. Instead, they enshrined it as a national ideology while relegating the popular practices of indigenous shamans and female mediums to the category of "superstitions"-- and thus beyond the sphere of tolerance. Josephson argues that the invention of religion in Japan was a politically charged, boundary-drawing exercise that not only extensively reclassified the inherited materials of Buddhism, Confucianism, and Shinto to lasting effect, but also reshaped, in subtle but significant ways, our own formulation of the concept of religion today. This ambitious and wide-ranging book contributes an important perspective to broader debates on the nature of religion, the secular, science, and superstition.
- amazon com -


The Fluid Pantheon: Gods of Medieval Japan
Faure, Bernard
Written by one of the leading scholars of Japanese religion, The Fluid Pantheon is the first installment of a multivolume project that promises to be a milestone in our understanding of the mythico-ritual system of esoteric Buddhism—specifically the nature and roles of deities in the religious world of medieval Japan and beyond. Bernard Faure introduces readers to medieval Japanese religiosity and shows the centrality of the gods in religious discourse and ritual; in doing so he moves away from the usual textual, historical, and sociological approaches that constitute the “method” of current religious studies. The approach considers the gods (including buddhas and demons) as meaningful and powerful interlocutors and not merely as cyphers for social groups or projections of the human mind. Throughout he engages insights drawn from structuralism, post-structuralism, and Actor-network theory to retrieve the “implicit pantheon” (as opposed to the “explicit orthodox pantheon”) of esoteric Japanese Buddhism (Mikkyō).

Through a number of case studies, Faure describes and analyzes the impressive mythological and ritual efflorescence that marked the medieval period, not only in the religious domain, but also in the political, artistic, and literary spheres. He displays vast knowledge of his subject and presents his research—much of it in largely unstudied material—with theoretical sophistication. His arguments and analyses assume the centrality of the iconographic record, and so he has brought together in this volume a rich and rare collection of more than 180 color and black-and-white images. This emphasis on iconography and the ways in which it complements, supplements, or deconstructs textual orthodoxy is critical to a fuller comprehension of a set of medieval Japanese beliefs and practices. It also offers a corrective to the traditional division of the field into religious studies, which typically ignores the images, and art history, which oftentimes overlooks their ritual and religious meaning.

The Fluid Pantheon and its companion volumes should persuade readers that the gods constituted a central part of medieval Japanese religion and that the latter cannot be reduced to a simplistic confrontation, parallelism, or complementarity between some monolithic teachings known as “Buddhism” and “Shinto.” Once these reductionist labels and categories are discarded, a new and fascinating religious landscape begins to unfold.
- source : uhpress.hawaii.edu -

. WKD : hatsumōde 初詣 "first visit". - to a temple or shrine in Japan

confusion in the blood
of Kami and Buddhas -
growing summer horns


This seems to be about the famous deer of Nara, who roam freely in the grounds of temples and shrines.

Yamazaki Ansai, drawing on the association of shin with the monkey (saru), advocated a Shintoistic kōshin cult, in which the primary object of worship was Sarutahiko. Within the Shugendō tradition as well, a unique form of the kōshin cult was propagated, so that there were three varieties of the faith: Buddhist, Shintō, and Shugendō.

. shinbutsu 神仏と伝説 legends about Kami and Hotoke - the Deities of Japan . 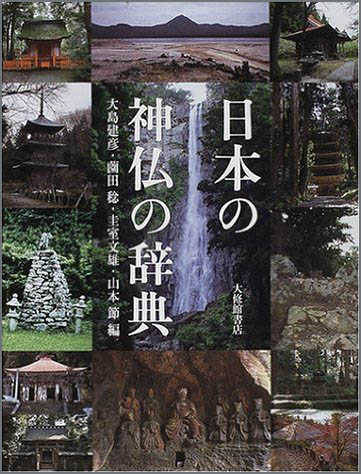