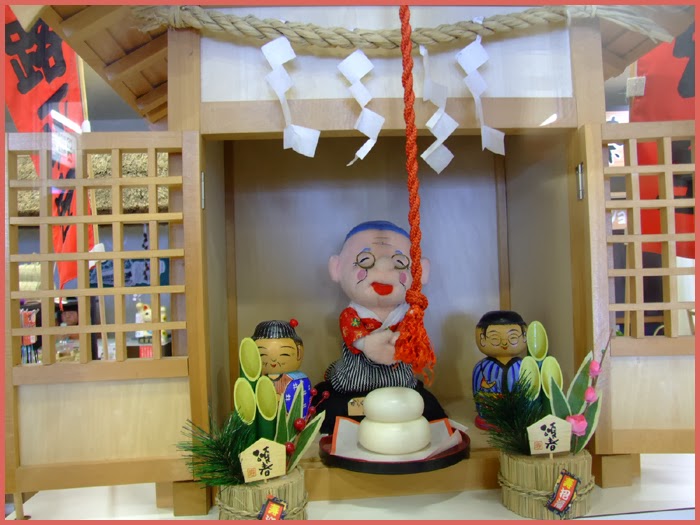 It is at the second floor of the station in the waiting room, just a very small shrine.

Jizo and the Old Man
Once upon a time there lived an old man and an old woman. The new year was just around the corner, so the old woman, with flaxen textiles she had woven by hand with heart and soul, said to the old man,
"The new year is coming closer. We'd better sell these textiles in Tadami and prepare for the new year. Would you go to Tadami to sell them?"
"All right," said the old man, and totteringly set out for Tadami in the rain, wearing a straw rain coat and a bamboo hat. In his hands were the textiles the old woman had woven.

In front of a shrine on the way to Tadami he found Roku-Jizo, or the six guardian deities of children, soaked with sleet. The deities appeared to be shivering in the freezing cold. The old man thought to himself, "I feel cold even wearing a straw rain coat and a bamboo hat. The Jizo-sama must be very cold. Oh, poor Jizo-sama...."
"I have a good idea! I will tear up the textiles my wife wove and cover the poor Jizo-sama with the strips."
Then the old man, getting the textiles down from his back, started ripping them into strips and using them to cover the Jizo. When he was finished he said to himself, "Jizo-sama must be somehow warmer now. I'm really glad. Since I have given them all the cloth my wife wove, I can no longer buy anything for the new year. Still, we can greet the new year with the buckwheat porridge or rice gruel we already have at home. I will talk about it to her when I get home."

Then the old man headed unsteadily for home. At home he talked about the guardian deities to the old woman, who was equally happy.

Jizo put down the loads with a thud in a corner of the house. "Very good. The old man will be delighted. Very good. Let's go back," said Jizo.

After Jizo left, the surprised old man and woman woke up to find out what had happened. They found, among many gifts, glorious articles for the new year-- you could probably find such splendid things only in a castle-- and red clothes for the children living in the vicinity of the old couple's abode.
"I tore up the textiles and covered Jizo-sama with them. Jizo-sama, who felt very warm in the shredded textiles, must have left these as a present for us," said the old man. The old man and woman blubbered for joy.

As everyone was preparing for the new year, the old man and woman distributed the red clothes and new year food among their neighbors, and they lived happily ever after.

. Jizoo Bosatsu (Kshitigarbha) 地蔵菩薩 Jizo .
Roku Jizo 六地蔵 Six Jizo
They are the guardian deities of the Six Realms of the afterlife.