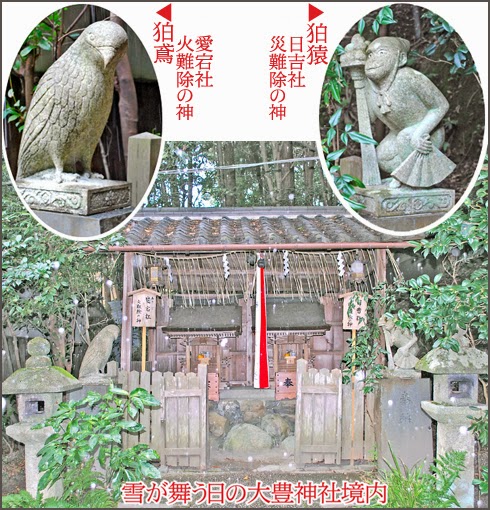 This shrine is famous for its three guardian animals:

- quote
... A long entrance path leads to the shrine. There are not so many visitors, mainly Japanese people who come to pray for health, long life and happiness. There is something unusual about this shrine that sets it apart from other shinto shrines. The guardians of the shrine are mice!
Here a little more about the history of this shrine taken from the web. 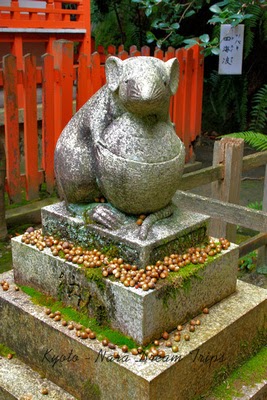 Otoyo Shrine (大豊神社) is a small place of worship which is located on the South side of Kyoto’s Tetsugaku no Michi.
Here, instead of shrine dogs, mice guard the shrine. Why mice? Here’s the background story: First, you need to know that in Otoyo Shrine, Okuninushi-no-mikoto, the god of marriage based in Izumo Taisha (a major shrine in Shimane Prefecture), is worshiped as a deity. He was a descendant of Susanoo-no-mikoto, one of the gods in Japanese myths.

According to the Kojiki, which is the oldest historical book in Japan, Okuninushi went to another world. He arrived there and met Princess Suseri, daughter of Susanoo. They fell in love with each other at first sight. Then Susanoo commanded Okuninushi to sleep in a room filled with snakes, but Princess Suseri gave Okuninushi a snake scarf, said to be one of ten ancient treasures. The scarf helped him to sleep safely in the room. Susanoo imposed another ordeal on Okuninushi. Susanoo shot an arrow into a vast plain and made Okuninushi go to retrieve it. When he was searching for it, Susanoo set fire to the surrounding plain. The flames spread quickly and Okuninushi lost all means of escape. Suddenly a mouse appeared and told him that there was a hole in the ground. While he was hiding in the hole, the fire passed overhead. Then, the mouse gave him the arrow. Thanks to the mouse, Okuninushi escaped by a hair’s breadth. He finally married Princess Suseri.

Otoyo Shrine traces its origins back to this story. It is said that mice will bring the health, long life and happiness. The mouse statue on the left has a sake bowl, which means that if you worship here you will have a healthy baby. The one on the right has a scroll. In addition to these statues, there are figures of a monkey and kite (hawk) in this shrine. You can enjoy observing these fascinating animal guardians. 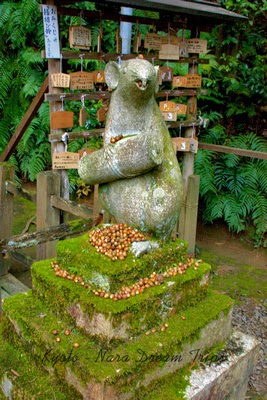 Enshrined at this shrine are Sukunahikona no Mikoto, Emperor Ojin and Sugawara no Michizane. Legend tells that this shrine was built in 887 as a prayer for the recovery of Emperor Uda from his illness.

a guardian to prevent fire 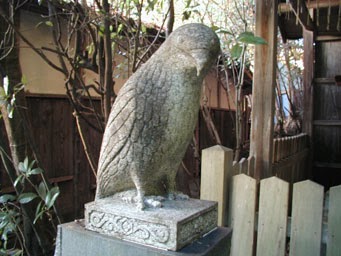 at Hiyoshi Yashiro 日吉社 Hiyoshi Shrine in the compound 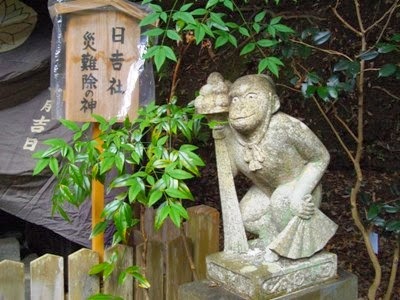 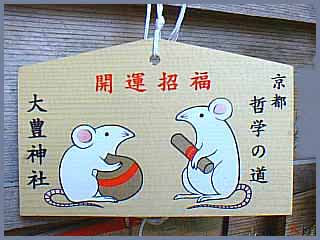 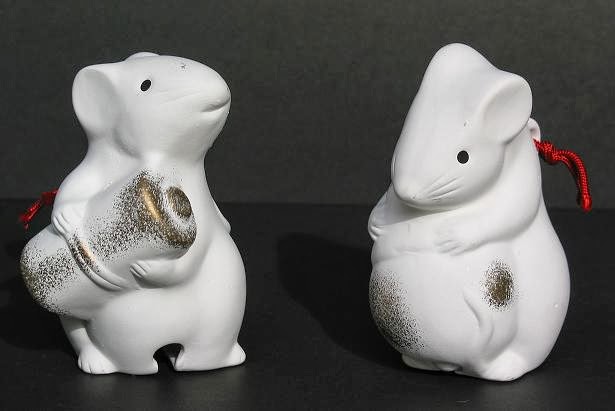 Clay bells with the two mice

- quote
Cherry and plum blossoms together
In a rare occurrence, a cherry tree and a plum tree at a Shinto shrine in Japan's ancient capital of Kyoto are blossoming at the same time.

The weeping cherry tree and the weeping plum tree are in front of the main hall of   Otoyo Shrine 大豊神社 . The shrine, which was built more than 1,100 years ago, is near a popular tourist site known as the "Philosopher's Path."
The plum tree, which is estimated to be 250 years old, is about 5 meters tall. The cherry tree stands almost 8 meters tall. 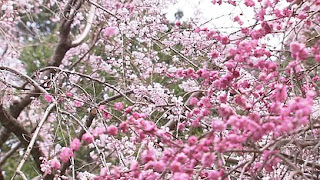 Every year, the plum tree is in full bloom around March 10th until the end of the month, while the cherry tree blossoms in early April.

Temperatures were unusually high in March, causing the cherry tree to begin to blossom late last week.
A shrine official says the cherry tree and the plum tree are blossoming together for the first time in 30 years. The blossoms are likely to remain until the end of this week.
source : NHK world news Mar. 26, 2013