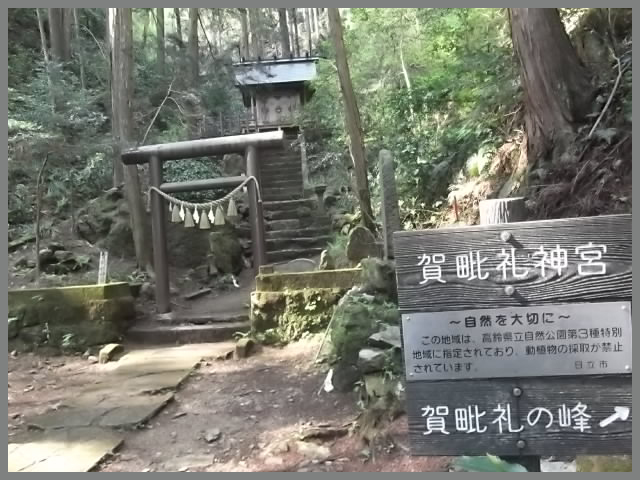 - quote
Historical background of Oiwa Shrine
The origin of Oiwa Shrine was described in the Hitachi-Fudoki which is one of the oldest history books published in the 8th century． In the book it was explained that God lived at the foot of Mt.Kabire，ie Mt.Oiwa, and inhabitants built a shrine there． The precincts of the shrine is broad and many small shrines are scattered there. In the Edo-era, some temples were also erected. These shrines and temples were preserved by Mito Tokugawa family. Policy of separating the temple and shrine was carried out in the Meiji-era， but some evidence of temple is remained here.Therefore Festival of the shrine is under the influence of Shinto and Buddhism.
- - - Strolling the grounds of the shrine
There is a big torii gate at 50m south from there and you just walk inside the spiritual ground of the shrine. Here also is starting point of a trail up Mt.Takasuzu where is the highest mountain in Hitachi City. Passing under the torii gate, the huge cedar called Sanbon-sugi can be found. In fact, the stem of 9m in diameter is one and it is divided into three at 3 m above the ground. The cedar is 50m in height and is estimated to be over 600 years old. The cedar "Sanbon-sugi" is designated as the natural monument by Ibaraki Prefecture.
Then there is a two-storied gate which was reconstructed at 1990's, and Nio Guardians (Nio-sama) are worshipped at both sides of the gate. In the cedar grove, the way continues to Hall (Haiden) of Oiwa Shrine through a small bridge that is painted red. There are some monuments and small shrines along the way. 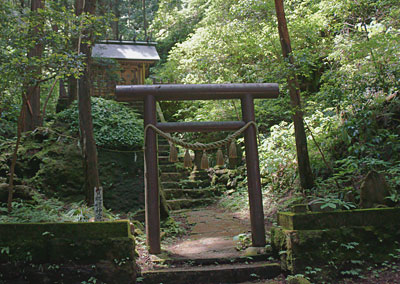 Climbing the narrow road behind the Haiden for about 20 minutes, Kabire shrine can be found in a dense and dark forest．
The narrow road is a mountain trail up to Mt.Takasuzu of 623m via Mt.Kabire (Mt.Oiwa) that is formed by oddly-shaped rocks．
- source : hyotanhitachi.web.fc2.com 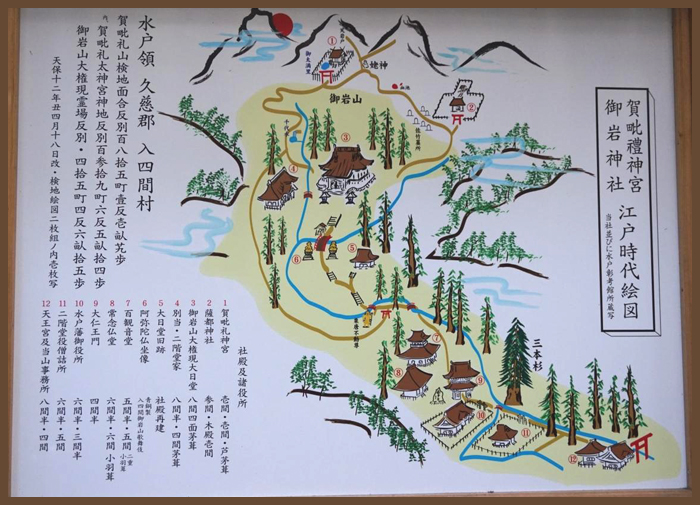 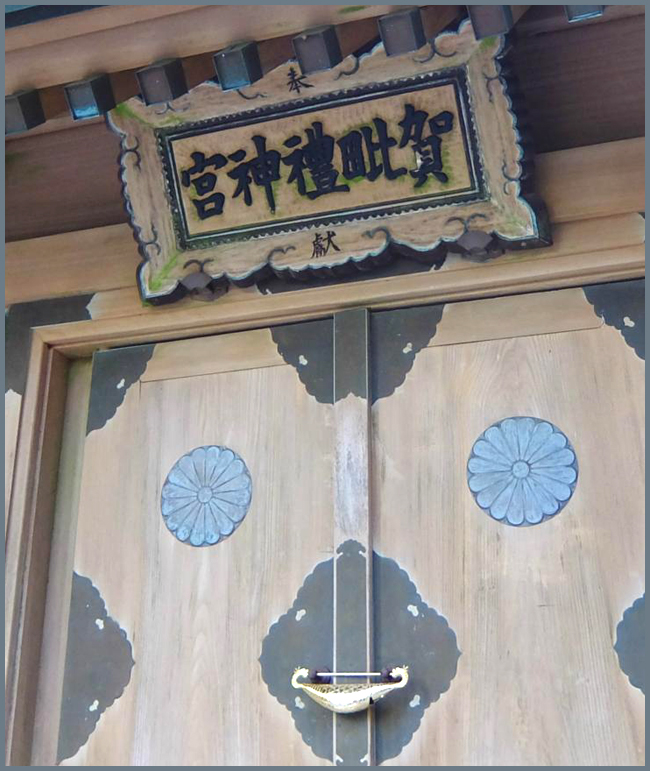 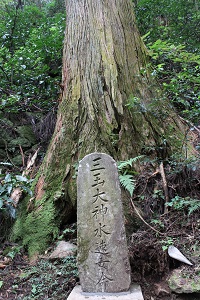 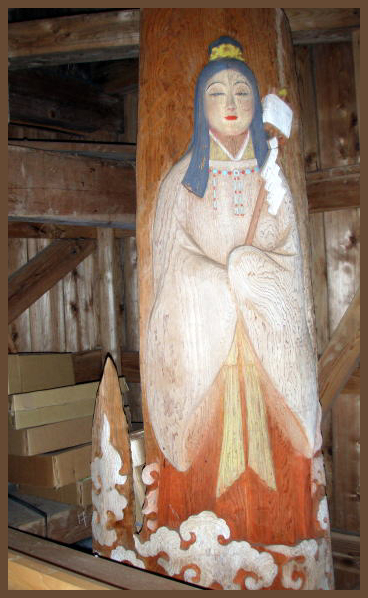 - quote -
Protector of wells, Mizuha-nome-no-mikoto, the well goddess
vs. Suijin-Sama, the water-god
The tutelar deity of well-cleaners is known by two names, Mizuha-nome-no-mikoto, the Goddess of Wells, and by the more generic Water-god, and usually male counterpart, Suijin-Sama whose role is to protect all wells and keep the water sweet and cool. The wells must be cleaned once a year, or the breaking of cleanliness law by the house-owners will incur the wrath of the deity, bringing sickness and death.
The goddess (god) rarely manifests her/himself, but when s/he does, s/he takes the form of a serpent. Her/His familiars or messengers, are usually a pair of fish called funa (crucian carp), a live pair are released into wells to eat the larvae inhabiting the well water.
..... The first water of the well must be drawn by a man, for the presumably jealous well goddess would be angered by a woman doing so.
..... R.A.B. Ponsonby-Fane in his “Studies of Shinto and Shrines”, traces the Mizuhanome deity to one of the three Amashi-no-kami rain deities enshrined in the Nibu-kawakami jinja, located on Upper River Nibu in Yoshino-gun.
..... Ponsonby-Fane also hypothesizes that Mizuha-nome-no-mikoto (or Mizuhanome-no-kami) was one of the water deities venerated by local indigenous aboriginals when Emperor Jimmu arrived and which is why it was decided to build the Nibukawakami shrine at that very location, and thereby including the female Mizuha-nome-no-mikoto, along with the other Amashi rain deities, Takaokami and Kuraokami, the latter two being male raingods.

The earliest date recorded in the Engishiki for the receipt of “hei” (offerings given by the Imperial Court) by the goddess from the Imperial Court is 763 A.D. though the founding of the shrine is given as a hundred years earlier.
Kojiki and Nihonshoki record Mizuha-nome-no-mikoto as the water goddess born to Izanami-no-mikoto, from her urine. (According to Kojiki, Kuraokami and Kuramitsuha were produced from the blood as it collected on the hilt of Izanagi’s sword and dripped through his fingers.)

The fact of the worship of a water goddess called Mizuha-nome-no-mikoto is thus corroborated by the Engishiki records, as well as both the Kojiki and Nihonshoki accounts.

“The title translated Rain-Chief is read Okami in the original and is written with two ideograms, one meaning rain and the other chief or head. We are thus in possession of an easy key to understanding the meaning of the names of the two deities, just introduced. The gods of the Nibu shrines are Dark Rain-Chief Deity (Kura-Okami-no-Kami) and “Fierce Rain-Chief Deity” (Taka Okami-no-Kami), kura(kurai) being taken in the ordinary sense of dark and taka being taken in the sense of takeki “fierce” or “brave”. [note: kura also means “narrow gorge beneath a cliff“]

The Upper River Nibu Kawakami shrine and the Lower River Nibu Kawakami shrine’s identical documents thus reveal the true function of the two male water-gods Taka and Kura Okami. The note in the shrine text document explained that the two deities are rain dragons, the lower shrine deity being a guardian of the valley, and the upper one, a guardian dragon god of mountain tops. Both deities are considered to be one, and to be Amashi-no-kami, rain gods. A black horse was offered to the Kura Okami deity to induce the deity to produce rain during droughts, while a white horse was meant to halt the rain. See A study of rain deities and rain wizards of Japan.

On the more generic water god, the Encyclopedia of Shinto has more on Suijin-no-kami or Water god.

“Water-kami,” a general term for tutelaries of water, found in a variety of forms. Water is of crucial importance in agriculture, and the availability and quality of water can spell life or death to farmers; as a result, tutelaries of water naturally came to be associated with rice-field tutelaries (ta no kami). Most suijin are found enshrined on the dikes of irrigation canals, or alongside paddy fields. In some cases, water kami may be found enshrined as “water distributing kami” (mikumari no kami) at the mountain springs forming the sources of agricultural waterways, in which cases they may also be associated with the kami of the mountain (yama no kami). In addition to their connection with the water used in agriculture, water kami are also found enshrined at sources of water used in everyday life, such as household wells, springs, and streams…”
- source : japanesemythology.wordpress.com-

- quote -
The Annotated Out of the East by Lafcadio Hearn / Chapter V
July 25 :
Three extraordinary visits have been made to my house this week.
The first was that of the professional well cleaners. For, once every year, all wells must be emptied and cleaned, for fear that the god of Wells, Suijin-sama, will be angry. On this occasion I learned some things relating to Japanese wells and their guardian deity, who has two names, also being called Mizuha-nome-no-mikoto.

Suijin-sama protects all wells, keeping their water sweet and cool, provided that house owners observe his laws of cleanliness, which are rigid. Sickness and death comes to those who break them. Taking the form of a serpent, the god rarely manifests himself. I have never seen any temple dedicated to him, but once a month, a Shintō priest visits the homes of pious families having wells, and he repeats certain ancient prayers to the Well God, and plants nobori, little paper flags, which are symbols, at the edge of the well. This is also done after the well has been cleaned. Then, the first bucket of the new water must be drawn up by a man; for, if a woman first draws water, the well will always thereafter remain muddy.

The god has little servants to help him in his work. These are the small fishes the Japanese call funa. One or two funa are kept in every well to clear the water of insect larvae. When a well is cleaned, great care is taken with the little fish. It was on the occasion of the coming of the well cleaners that I first learned of the existence of a pair of funa in my own well. They were placed in a tub of cool water while the well was refilling, and thereafter were put back into their solitude.

The water of my well is clear and ice-cold. But now, I can never drink from it without a thought of those two small white lives, always circling in darkness, and startled for untold years by the descent of splashing buckets.
- source : facebook -

Legend from Aichi
知多郡 Chita district 美浜町 Mihama
.
ryuutoo kannon 竜頭観音 Kannon on a Dragon Head
Near Okuda village there is a there was a small Shrine in an quiet forest the size of a rice field.
On the hut is a name frame with the letters 竜頭観音 Kannon on a dragon head.
In olden times, the deity 美津波能女之命 Mizuhanome no Mikoto came here down from heaven, riding on a dragon, and healed the illness of 少彦名命 Sukuna no Mikoto.
On this spot a well appeared and the water would heal the illness of the villagers.
.
https://japanshrinestemples.blogspot.com/2016/05/kabire-jingu.html
.