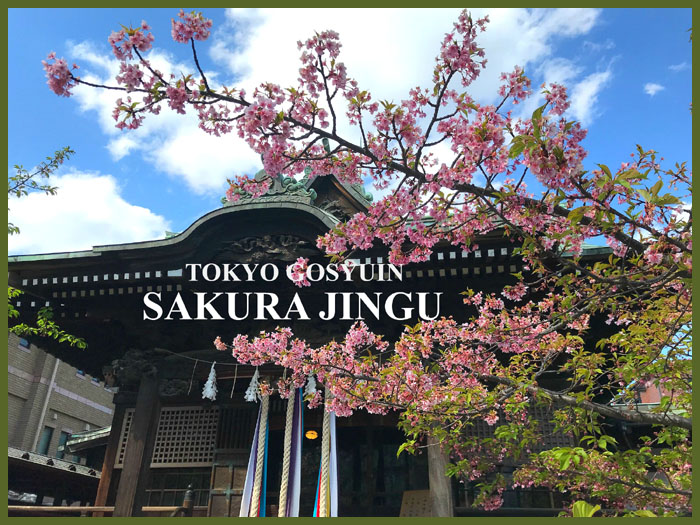 - quote
Sakura Jingū Association
The Association was built to enhance the spirit of the deities by thanking them and our ancestors, and to offer a 'healing' and 'connecting’ place, aiming to make people's daily life peaceful, Members of the association have many benefits including a protective talisman offered anually our newsletter subscription, opportunities to pray in the sanctum, participation in meditation before kami, and wedding ceremonies and funerals.

History and origin
Yoshimura Masamochi, the 65th descendant of Ōnakatomi, was a warrior of the imperial loyalists in Kyoto. During the early Meiji period, he worked at the Department of Shinto Affairs (which later became the Ministry of Religious Education), and took part in policy making for Shinto propagation under the government. Served as chief priest of a shrine, he devoted himself into spreading the teachings of Shinto.
However, when the Meiji government suddenly altered their religious policy, Masamochi decided that it was his mission to lead people to the traditional Shinto values. He founded a religious organization and established a religious facility (a shrine) in Kanda. It became an independent sect called Shinshu-kyō, sanctioned by the Meiji Emperor in 1882.
Masamochi, who was highly favored by Saigo Takamori and Ito Hirobumi as well as other key government officials, spent time with Percival Lowell, an American astronomer and a devout Christian, and taught him Shinto beliefs during his stay in Japan. Introduced by the Ministry of Foreign Affairs and the books of Lowell, more than 200 Westerners visited annual festivals at the shrine during the Meiji period. Masamochi received an oracle just before his death, which resulted in the relocation of the shrine to the current location in the early Taisho period.

Mitamashiro (A physical object of worship) 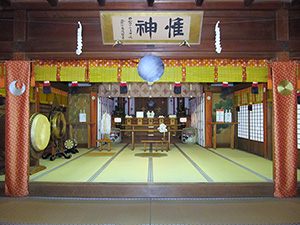 The mirror (mikagami) of Chrysanthemum of 16 petals is the object of worship. The mirror was enshrined in Edo castle during the Edo period before the buildings of shrine in the castle was destroyed by a fire. After approved by the Imperial court, the mirror was then enshrined in Shin- mei-gū shrine by Keikōin in Reigan-jima island in Fukagawa, Tokyo. The mirror was moved again to a Grand Shrine after the Meiji Restoration. The then supreme priest of the shrine, Kuninomiya Asahiko Shinnō (Prince), who confided Masamochi, he himself divided the spirit of the enshrined deity of the Grand Shrine to the mirror, which was then granted to the shrine when Masamochi left his post.

Worshipping via Internet
"Remote" Worship is available for those who live abroad or in a remote place, or those who are unable to come due to their work or health issues, by simply following the guide on our website. We offer inquiries and consultation services as well.
- source : sakura.jingu.net/english 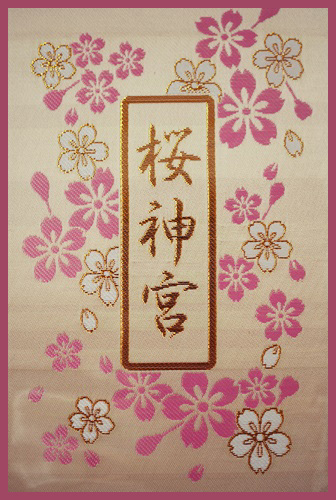 河津桜 Kawazu Sakura
one of the earliest-blooming cherry blossoms in the outskirts of Tokyo. 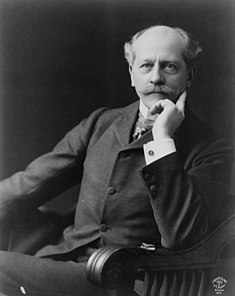 was an American businessman, author, mathematician, and astronomer who fueled speculation that there were canals on Mars. He founded the Lowell Observatory in Flagstaff, Arizona and formed the beginning of the effort that led to the discovery of Pluto 14 years after his death.
Percival graduated from the Noble and Greenough School in 1872 and Harvard University in 1876 with distinction in mathematics. At his college graduation, he gave a speech, considered very advanced for its time, on the nebular hypothesis. He was later awarded honorary degrees from Amherst College and Clark University. After graduation he ran a cotton mill for six years.
In the 1880s, Lowell traveled extensively in the Far East.
In August 1883, he served as a foreign secretary and counselor for a special Korean diplomatic mission to the United States. He lived in Korea for about two months. He also spent significant periods of time in Japan,
writing books on Japanese religion, psychology, and behavior.
His texts are filled with observations and academic discussions of various aspects of Japanese life, including language, religious practices, economics, travel in Japan, and the development of personality.
Books by Percival Lowell on the Orient include
Noto: An Unexplored Corner of Japan (1891) and
Occult Japan, or the Way of the Gods (1894), the latter from his third and final trip to the region.
The most popular of Lowell's books on the Orient, The Soul of the Far East (1888), contains an early synthesis of some of his ideas, that in essence, postulated that human progress is a function of the qualities of individuality and imagination.
The writer Lafcadio Hearn called it a "colossal, splendid, godlike book."
At his death he left with his assistant Wrexie Leonard an unpublished manuscript of a book entitled Peaks and Plateaux in the Effect on Tree Life.
- - - More in the WIKIPEDIA ! 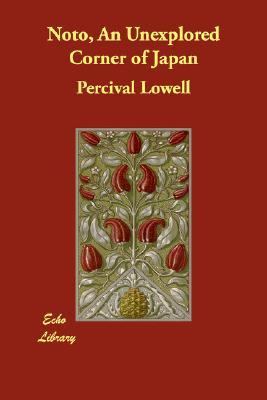 Noto: An unexplored corner of Japan
Percival Lawrence Lowell (1855-1916) was a businessman, author, mathematician, and astronomer who fueled speculation that there were canals on Mars, founded the Lowell Observatory and formed the beginning of the effort that led to the discovery of Pluto 14 years after his death. Percival graduated from Harvard University in 1876 with distinction in mathematics. In 1883, he served as a foreign secretary and counsellor for a special Korean diplomatic mission to the United States. He also spent significant periods of time in Japan, writing books on Japanese religion, psychology, and behavior. His texts are filled with observations and academic discussions of various aspects of Japanese life. Books by Percival Lowell on the Orient include Noto: An Unexplained Corner of Japan (1891) and Occult Japan (1894).
The most popular of Lowell's books on the Orient, The Soul of the Far East (1888) contains an early synthesis of some of his ideas, that in essence, postulated that human progress is a function of the qualities of individuality and imagination.
Amongst his other books are Mars (1895) and The Genesis of the Planets (1916) 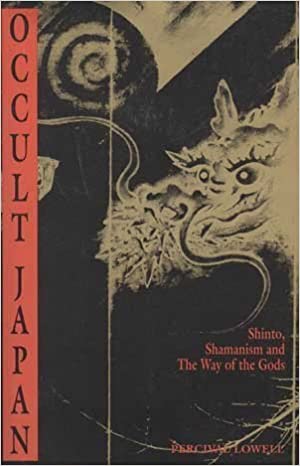 Occult Japan: Shinto, Shamanism and the Way of the Gods
Shinto, or The Way of the Gods, is the oldest religious faith of the Japanese people. Based on the aboriginal worship of nature and ancestors, it is a religion of innumerable deities and rituals. As Buddhism established itself in Japan, it absorbed many of the Shinto beliefs while assigning them an inferior status. Officially unrecognized by the Buddhist state, ancient Shinto practices have been kept alive to this day as an occult tradition embodying the magical, primeval, and shamanic rites central to the Japanese culture.
'Occult Japan'
was originally published in 1894 and is still unrivaled in its detailed descriptions of Shinto 'miracles, possessions, and incarnations.' Percival Lowell, an explorer and author of several other works on the Far East, drew these descriptions from his own observations and experiences during his travels throughout Japan at the end of the 19th century. Unlike other accounts written on the subject by religious missionaries, his are startling in their frankness and objectivity, neither underestimating nor romanticizing the Shinto religion, but presenting its many contradictions with candor and literary grace.
- wikipedia - 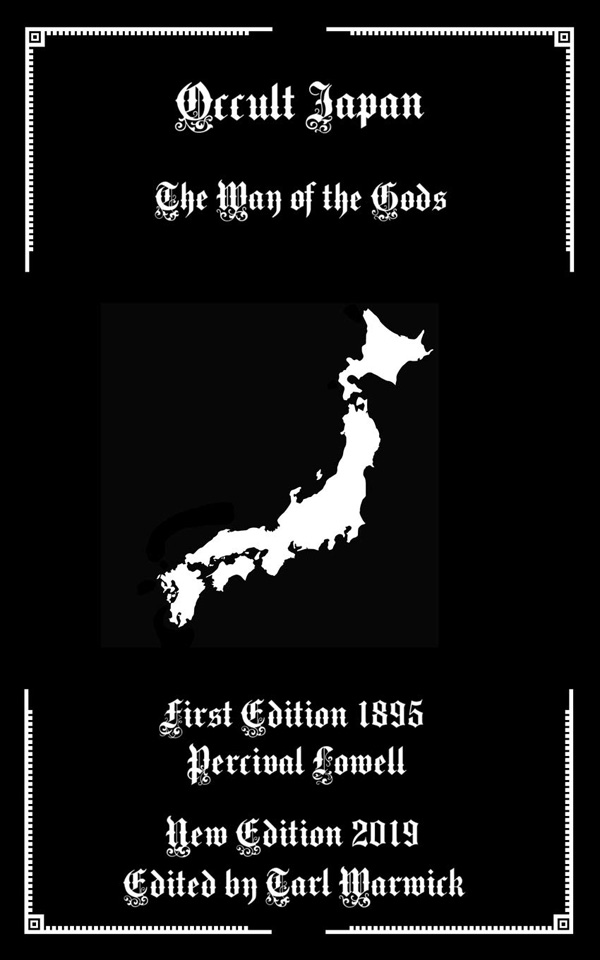 Occult Japan: The Way of the Gods
"Occult Japan" is a wonderful collection of lore compiled from the Shinto path, dating to an important era in which the nation of Japan was rapidly changing; the Meiji period which had begun several decades before was erasing traditional technology even as it changed cultural and behavioral norms- this work then is both about the traditional spiritual system and the effects of then-modern reform on the same. It is as much a work about culture in the secular as the religious sense.It ought to be noted that some trappings of ethnocentrism were applied in the study here.
- wikipedia - 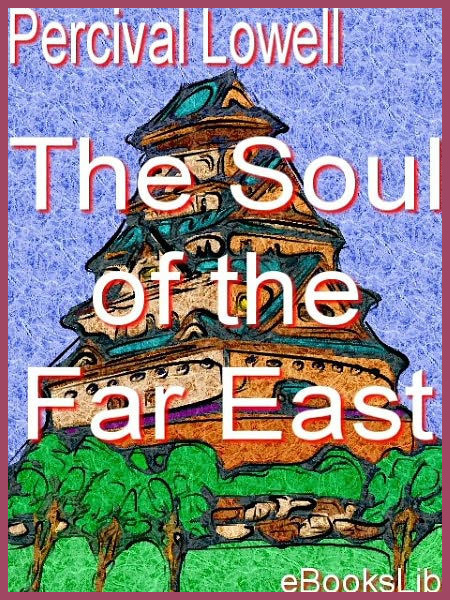