kegare and misogi, see below


quote
Imi means abstinence or taboo, or the avoidance of that which is abnormal (magakoto), imperfect (tsumi) and polluted (kegare), and the removal of those states. Originally 忌み and 斎み (both pronounced imi) were synonyms, in the sense that both meant removing abnormality, imperfections and pollution and praying for good fortune to present itself.
For example, the fire used to cook offerings presented to the kami is called "abstinence fire" (imibi), the food thus prepared is called "abstinence fire meal" (imibi gohan), and the place where the cooking occurs is an "abstinence fire room or hut" (imibiya). Taboo words are called imikotoba.
source : Nishioka Kazuhiko, Kokugakuin 2007

quote
Imikotoba 忌み言葉 Taboo words.
Special words used by people performing kami rituals, and by those attending them, in the Imperial Palace or in shrines. People used imikotoba for the duration of the ritual in the place where it was being performed in order to preserve the purity of the rite by avoiding certain everyday words. Words concerning death and Buddhism were particularly abhorred. The taboo words associated with the saigū (Chief Priestess) of the Grand Shrine of Ise (Ise Jingū) are listed below.

Taboo words associated with things such as the mountains, fishing, the New Year and night, were also found among ordinary people. They were very important to those who lived conscious of the everyday existence of kami and spirits. Certain of these, such as atarime (for dried squid, surume) and etekō (for monkey, saru, whose homophone means "depart" and is used as a euphemism for death, and therefore is inauspicious) have entered everyday speech.

According to the Engishiki, the taboo words of the Chief Priestess of Ise (saigū) were:

. imiki, imi ki 忌み木 "taboo tree" .
shinboku 神木, shinju 神樹 sacred tree, divine tree
A tree that should not be cut down, because the deities reside here on their travels from Mountain to Valley and around Japan. If cut down, they will cause misfortune and death to the wood cutter.


The three lunar months of 1, 5 and 9 were special months of abstinence, and there were no weddings or large celebrations held in these lunar months.
Young girls stayed indoors as miko maidens and performed purification rites. (imigomori 忌み篭もり)

. satsuki imi 五月忌 abstention in the month of satsuki .
kigo for mid-summer


. imigomori 亥巳籠 (いみごもり) retreat .
at the shrine Hioka jinja 日岡神社 in Kakogawa, Hyogo
It is a pun on the sound of IMI (imi 忌み)
a period of respectful mourning or
a period of paying great respect to the deities.

the taboo day
for Shingu shrine is August
the twelfth

quote
A polluted and evil condition; a concept opposite of purity.
A condition of taboo in Shinto.
From ancient times transgressions (tsumi) have been understood as the result of human behavior,
but kegare is seen as the result of naturally occurring phenomena.
It was thought that when this corruption adhered to the individual it also brought calamities to society. In general kegare can be purified by ritual ablutions (misogi).

However, people who upset the order of things by bringing pollution into a ritual space or into a community were treated as in transgression (tsumi), and a ritual purification (harae) was also required. In the jingiryō (Laws on Deities) there were regulations regarding purification and taboos concerning mourning, visiting the sick, eating meat, capital punishment, determining punishment, and evil pollutions, collectively known as the six forms of taboo (rokushiki no kinki).

Warrior families of later periods strictly observed similar rules for mourning. In recent folklore studies one group of scholars has viewed kegare as a condition in which ke=ki (vitality) has withered (kare), in other words, vitality has dissipated.
source : Nishioka Kazuhiko, Kokugakuin 2007


- quote
The Kegare Concept
Lauren Levine
Kegare (穢れ) is a Japanese concept that refers to conditions of spiritual contamination, uncleanliness, or pollution. The concept is thought to have developed in the Yayoi period of prehistoric Japan. It was written about by the Chinese in the Han and Wei chronicle and
was mentioned in the Japanese Kojiki in 712 (Norbeck 1952, 269).
Like many concepts associated with religious ideals and behaviors in Japan, it combines Shintoistic properties with Buddhist ones. As an thropologist Joy Hendry (2003, 119) observes, “Most Japanese people can without conflict practice both Buddhist and Shinto rites, some times these are even combined.” Because kegare is associated with
menstruation, birth, death, and sickness, it can be frequently misunderstood as physical contamination. However, as my observations will show, the concern is not primarily over hygiene, but spiritual pollution.

The concept of pollution in Japanese society was more overt in previous eras and could even involve legal sanctions, but it has be come more diluted over time. Laws originally in place regarding kegare have gradually been abolished. In 1872, for example, “the state abolished intragovernmental regulations regarding the birth kegare, a move that freed officials to go to work even if their wives or other female relatives had just given birth. Early in 1873 the council went a step further by abolishing any and all regulations designed to prevent the transmission ofkegare” (Bernstein 2006, 62-64).
My experience suggests that today kegare has become more of a social ideology than a religious doctrine, and if asked what it involves and why, Japanese people cannot often give a clear explanation. Some of this lack of clarity stems from the fact that rituals or behaviors can be kegare in some situations, and acceptable in others.
As I will show, this is because one of the most polluting acts that someone can commit is “mixing realms” or acting in a way that disrupts the “normal Japanese” life cycle pattern. Although in Japanese there are other terms that refer to pollution, such as tsumi
(罪), often translated as sin, I have chosen to use kegare for all pollution terms, because it is the broadest.
... That there are distinctly compartmentalized domains in Japan is by no means a new discovery. In her overview of Japanese culture, for example, Joy Hendry (2003, 44) points out that “uchi and soto" are associated with the clean inside of the house, and the dirty outside
world, respectively.
... In historic Japan, it was normal for a section of the city to be designated for legal prostitution. But this has to be carefully regulated to maintain proper relations within the inside boundaries. This can be seen when all prostitution in Edo (today’s Tokyo) was moved to the Yoshiwara district. “In the year 1617 ... the city in general was purified, and all the libertinism in it—permitted, but regulated—was banished to one special quarter” (Chamberlain 1971, 524). Currently, prostitution is illegal in Japan, but “massage” parlors and hostess bars that offer “private sessions” can still be found throughout the country.

... Another category of kegare is shi-e (死穢). This is kegare that pertains to death, translating into English as “death impurity” (Abe 2001, 1). Death, the sick and dying, and corpses, are thought to be kegare, and great caution is taken around death to avoid its spread. ... In an attempt to alleviate the problems associated with such an abnormal end to the course of a normal life cycle, the hanayoume ningyou ritual (花嫁人形) was created.
Hanayoume ningyou is Japanese for “bride doll.” This is a marriage ritual held for the spirit of a young relative, such as a miscarried offspring or a victim of disease or war
who has died before being able to marry.

... The kegare of childbirth also lasted 32 days, and during this time the new mother could not leave the house through any of the rooms that held a household shrine. For the first 15 days, the mother must do no cooking, and if she went outside, she must cover her head in order
to avoid defiling the sun (Norbeck 1952, 272-273).

... Historically, so-called unclean people, called the eta (穢多) (the kanji can be translated to mean an abundance of kegare), were not allowed to grow rice or live near areas where rice was cultivated.
- source : newfoundpress.utk.edu 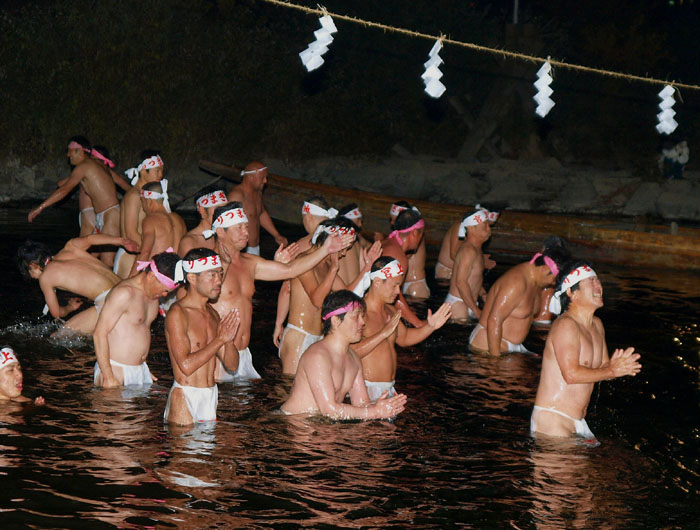 
quote
Misogi 禊 みそぎ Ablutions.
The practice of washing one's entire body and, in doing so, purifying oneself from the misfortunes, sins and pollutions (tsumi kegare ) that have become attached to the body.

According to the Kojiki and Nihon shoki, the mythical origins of this practice can be found in the story of how Izanagi, after returning from Yomotsukuni, performed ablutions and ritual purification at Awagihara to rid himself of the pollution (kegare) of the underworld.

Because misogi and ritual purification (harae) form a linked sequence of acts and ideas, they are often referred to by the single term misogiharae. In this context, one can find instances where misogi and harae are used interchangeably, but they originally signified distinctly separate practices. Misogi may be performed prior to a religious service or during a visit to a shrine. In addition to cleansing a body of pollution, misogi is also performed to welcome a new spirit and ease its attachment to a human body.
source : Nishioka Kazuhiko , Kokugakuin 2007

the waterfall guardian
purifies himself
with a huge fire ritual 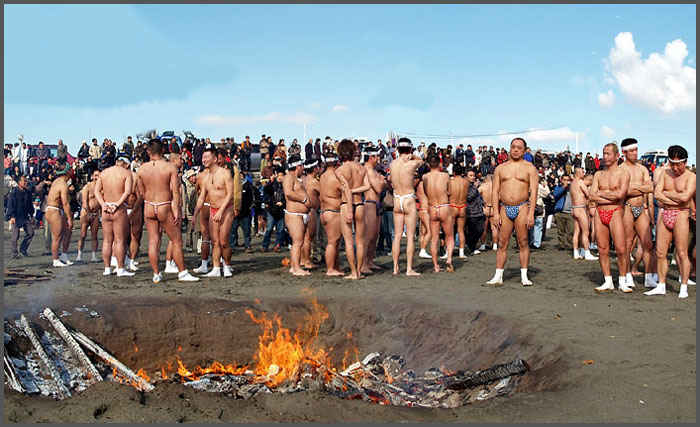