quote
Wakamiya
A general term referring to a minor shrine serving the kami of a separate main shrine (hongū), or to its related kami. Shintō myōmoku ruijūshō; defines wakamiya as a shrine dedicated to the offspring (mikogami) of the kami worshiped at a main shrine, or to the newly apportioned branch of a shrine (see kanjō). In practice, however, the usage goes beyond this definition, in some cases being applied to shrines dedicated to the same deity as that of the main shrine, to deities other than mikogami, or to temporary shrines of the main deity (see otabisho).

At first, many of the kami worshiped at wakamiya were kami of possession which revealed themselves through oracles delivered to priests (shinkan) and female shrine mediums (miko), but they gradually evolved from this earlier stage to the status of deities regularly worshiped at fixed shrines. It is from the way in which such kami were enshrined within the confines of permanent religious structures that some wakamiya are explained within the context of cults dedicated to goryō (vengeful spirits of the deceased).

The first appearance of wakamiya in historical records is a mention of the shrine "Keta Wakamiya" in the province of Hida, within an entry of Nihon sandai jitsuroku for the 4th day of the 8th month for the year 873.

Keta Wakamiya is believed to have been a shrine apportioned from the main Keta Honsha (presently Keta Jinja) in Noto Province. This incident indicates that wakamiya in the sense defined by the Shintō myōmoku ruijūshō were already in existence by the ninth century.

Most examples of wakamiya are associated with major kami like Kamo, Kasuga, and Hachiman, but they possess a diverse range of features. Records from 881 mention a Kamo Wakamiya in Hida Province, another shrine apportioned at an early date. The first example of a Kasuga Wakamiya is seen in 1135, when one was dedicated by Fujiwara Tadamichi, but in fact, this shrine was a mikogami ("offspring kami") apportioned by acolytes of Kōfukuji as a means of enhancing their influence on the rites at the shrine Kasuga Taisha; as a result, the wakamiya's rites were observed independently of the main shrine's, giving it a strongly autonomous quality.

In the case of Hachiman, a large number of apportioned branch shrines are known by the name wakamiya. For example, the Sameushi Hachimangū enshrined at Minamoto Yoshiie's birthplace was also known as Wakamiya Hachimangū; its origins go back to an occasion when the portable shrine from Iwashimizu Hachimangū was carried into Kyōto. Likewise, the Azuma kagami refers to the shrine Tsurugaoka Hachimangū in Kamakura as a wakamiya, and the earlier established Yui-gō Hachimangū as a shimo wakamiya (lower wakamiya), demonstrating that many apportioned Hachimangū shrines in time came to be known as wakamiya.
source : Matsubara Seiji, Kokugakuin 2005 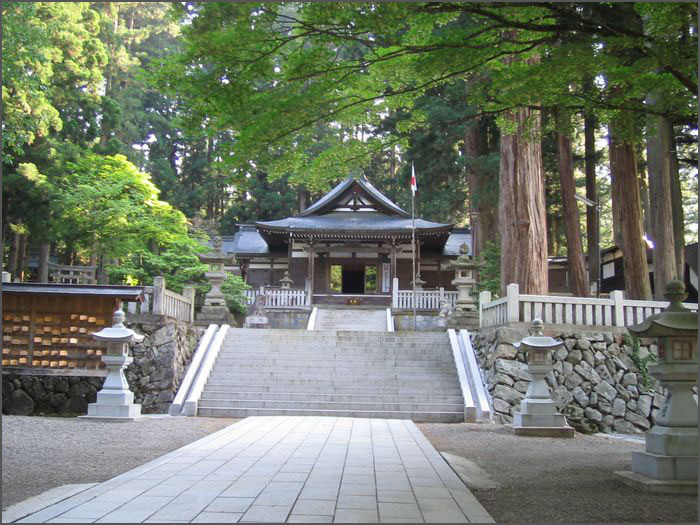 up the stairway
of shrine Keta Wakamiya
a butterfly in autumn 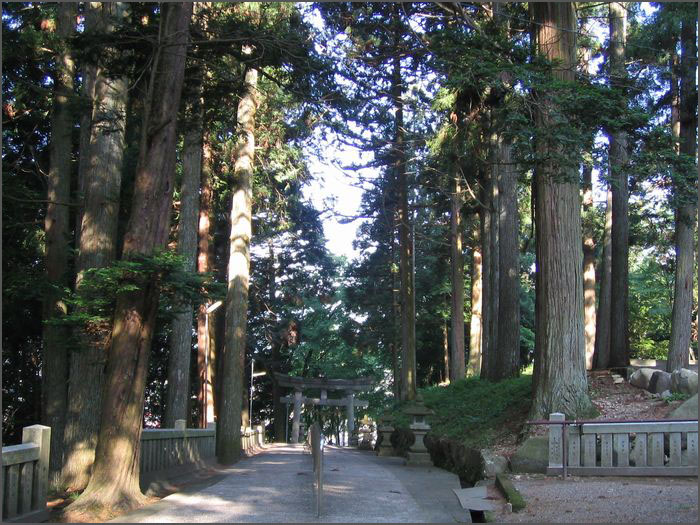 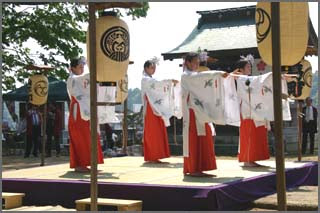 shrine Wakamiya
dancing a ritual dance
at the Culture Day

Wakamiya Ōji (若宮大路) is a 1.8 km street in Kamakura, a city in Kanagawa Prefecture in Japan, unusual because it is at the same time the city's main avenue and the approach (sandō (参道?)) of its largest Shinto shrine, Tsurugaoka Hachiman-gū. Over the centuries Wakamiya Ōji has gone thorough an extreme change. A heavily trafficked road today, it used to be, to the contrary, off limits to most people as a sacred space. 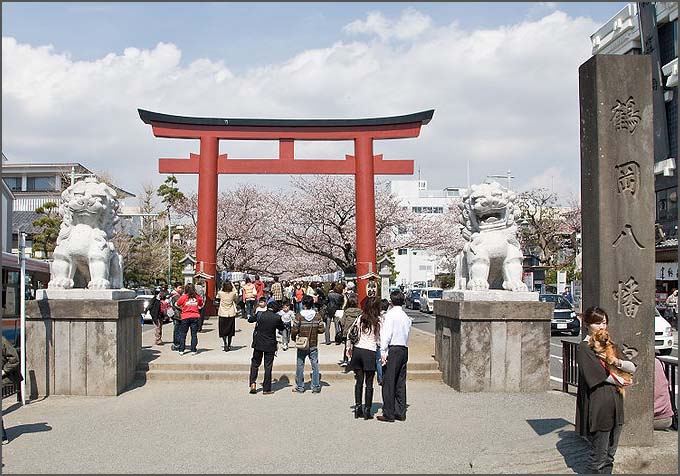 Immediately after the Torii gate begins the dankazura (段葛), a raised pathway flanked by cherry trees which becomes gradually wider as it goes toward the sea.

At the time of the Kamakura shogunate it was an essential part of the city's religious life, and as such it hosted many ceremonies and was rich with symbolism. Since its construction Wakamiya Ōji has been the backbone of the city's street planning and the center of its cultural life.
The street has been declared a Historic Site and was chosen as one of the best 100 streets in Japan.
© More in the WIKIPEDIA ! 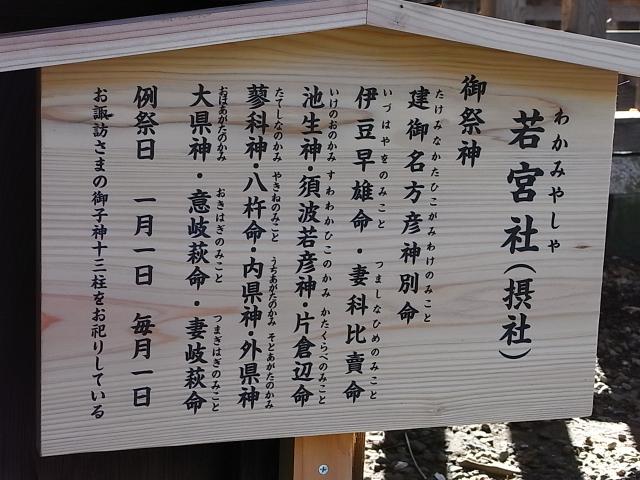 source : loosefrog.blog46
Wakamiya Sha 若宮社 － at Suwa Taisha 諏訪大社
There are 13 "venerable pillars 柱" as children of the deity.

quote
"Honorable-child-kami,"
a term used in the context of cults of parent-child deities to refer to the offspring kami (also called byōeishin). For example, the fragmentary Tsukushi no kuni fudoki describes the three-peaked mountain of Kishimayama as follows: "the peak to the southwest is called the hikogami [male-kami], the middle peak is called the himegami [female-kami], and the one to the northeast is called the mikogami (offspring-kami)." In this kind of relation with a child kami, the implied parent may be either father or mother; the latter can also be understood within the framework of cults devoted to "mother-child deities" (boshijin)

Cases of the enshrinement of mikogami in the narrow sense include those at shrines Yasaka Jinja and Dazaifu Tenmangū. The Yasaka shrine is dedicated to Susanoo as its chief kami, with his consort Kushinadahime on the east, and eight offspring deities (yahashira no mikogami) on the west. The yahashira no mikogami include

Within the precincts (keidai) of the shrine Dazaifu Tenmangū, an associate shrine (sessha) is dedicated to Sugawara Takachika and Sugawara Kageyuki, offspring of the shrine's principal object of worship, Sugawara Michizane.

Another example of mikogami is found at Kasuga Taisha-the Fujiwara clan shrine (see ujigami) -where one of the deities worshiped is Amenokoyane no mikoto, claimed as ancestral deity (sojin) of the Nakatomi clan. In turn, an affiliated shrine, Wakanomiya Jinja enshrines Amenooshikumone no mikoto, the divine offspring of Amenokoyane.

Kasuga's Wakamiya shrine, however, was established in 1135, promoted as part of the move by acolytes of the temple Kōfukuji to control Kasuga; at the same time, its worship was also closely related to the belief in goryō (vengeful spirits of deceased persons of high rank), which came into vogue during the late Heian period. Further, not all wakamiya enshrine offspring of the central deity; some are dedicated to the central deity's parent or ancestral deity, and some act as temporary enshrinement sites (anzaisho, karimiya) for the central deity when it travels from its original shrine during festivals. For this reason, the mere presence of a mikogami does not necessarily indicate the shrine is a wakamiya.
source : Kobori Keiko、Kokugakuin 2005 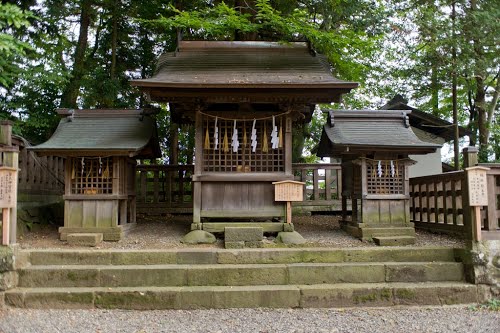 Three shrines at Suwa - Wakamya shrine is in the middle.
皇大神宮社・若宮社・稲荷社