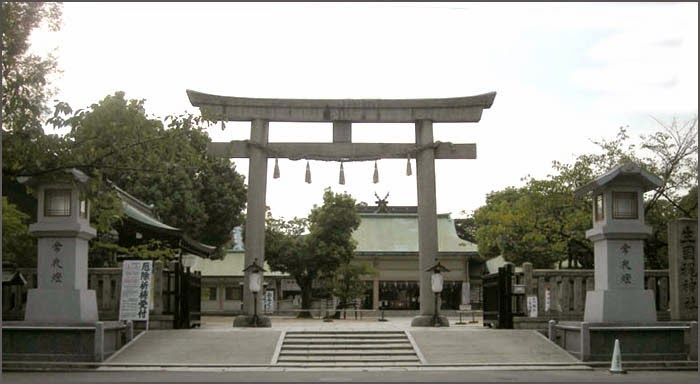 - quote
Engishiki-Myojin taisha that started when the gods Ikushima-no-kami and Tarushima-no-kami were enshrined in Ishiyamazaki (currently the area around Osaka Castle).

The current main pavilion was rebuilt after the war and now has concrete walls and sheet copper roofing, but still passes on ancient remnants of the Momoyama Period. The shrine is crowded on certain dates when ceremonies are held every year: on June 30th, the Oharae Ceremony is held to drive away bad luck and illnesses; on July 11th and 12th, the Ikutama Summer Festival; on August 11th and 12th, the Osaka Takigi Noh; and on the first Saturday of September, the Hikohachi Festival, which is held in relation to Hikohachi Yonezawa, the originator of kamikata rakugo.
- source : www.osaka-info.jp/en 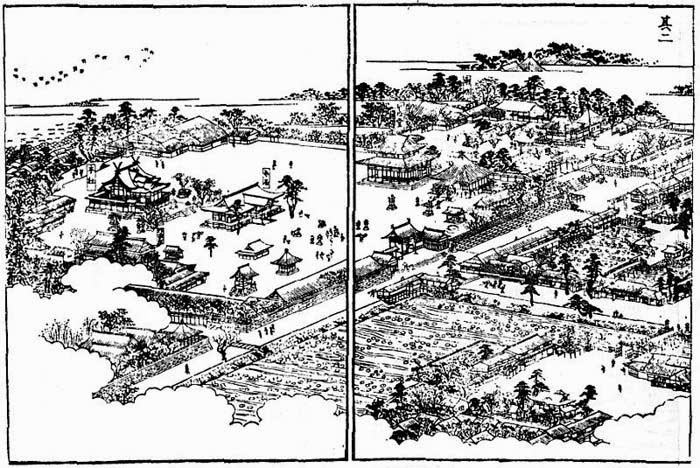 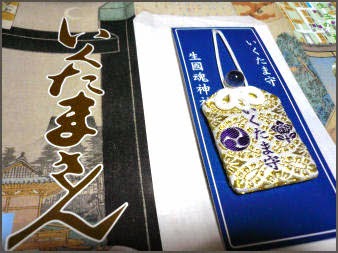 - quote
Since ancient times certain trees or entire groves within shrine precincts were regarded as sacred, as attested by expressions such as "the cryptomeria revered by the priest (hafuri or hōri) of Miwa," or "the sacred forest (kannabi)" (both expressions found in Man'yōshū), or from the records of Emperor Kōtoku in Nihongi, "he despised the way of the kami by felling the trees at the Ikukunitama Shrine."

Hatsuho matsuri
A festival celebrating the first ears of rice harvested is held on October 15 at Ikukunitama Shrine in Tennōji Ward, Osaka City, Osaka Prefecture. Formerly held on the twenty-eighth day of the ninth lunar month. Bamboo baskets containing the rice ears, are taken by twelve young girls acting as food servers from the shinsensho, where food offerings are prepared, and presented before a portable shrine (mikoshi) in front of the inner sanctuary (honden). Norito incantations are recited by the chief priest (gūji), followed by the formal offering of tamagushi, as well as other ceremonies, and a kagura dance is performed. This festival is considered to form a pair with Sanae matsuri (Rice Sprouts Festival), a rice-planting observance held at the shrine on May 28.

Uzue shinji
"Rabbit-staff rite." A rite held on January 15 at Itakiso Shrine in Wakayama City, Wakayama Prefecture. Thirteen sticks of cut bamboo are stuck into cooked rice gruel. The richness or meagerness of the year's crops is divined by how much gruel has gotten into the bamboo sticks. The rite dates back to ancient times; the uzue (staff of the rabbit zodiac sign) has disappeared from the ritual, leaving only its name.
Two festivals are held on January 7—" the day of the seven greens" (nanakusa no hi)— at Ikukunitama Shrine in Tennōji Ward, Osaka. These are the wakabasai (festival of new leaves) in which seven varieties of young greens are eaten to prevent all illnesses, and the uzue matsuri, in which uzue staffs are offered to the kami for protection from demons.
- source : Kokugakuin


- quote
Osaka’s Ikukunitama Shrine set to revive ritual for first time in 70 years
Ikukunitama Shrine in Osaka next month will revive a Shinto ritual using a newly built “gohoren,” or a phoenix float, after a hiatus of 70 years. 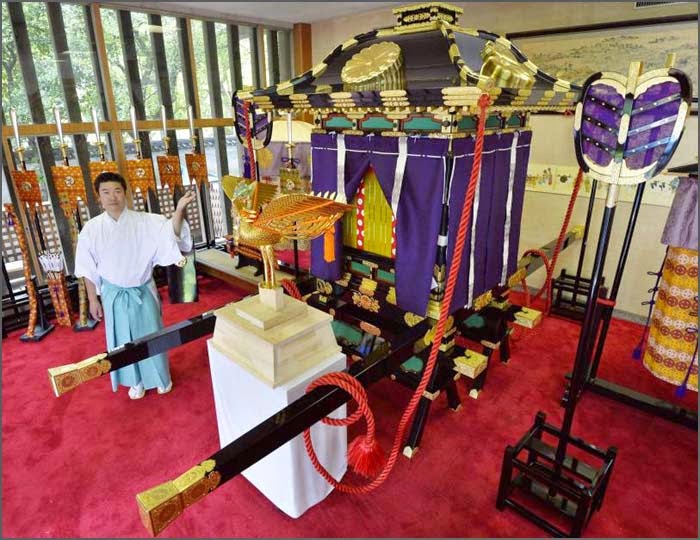 The float was shown to the media for the first time Tuesday.

A phoenix float was traditionally used at a ritual involving transferring the shrine’s deity from its place of enshrinement to Osaka Castle.
Officials of the shrine, known as “Ikutamasan” and located in Tennoji Ward, said about a decade was needed to plan and build a new float.

The new vessel will be used for the first time during the summer celebration planned for July 12.
The annual event features a procession led by “makura daiko,” or pillow drums, that according to legend Toyotomi Hideyoshi offered in dedication to the shrine’s deity.

Ever since Toyotomi rebuilt the shrine in 1603, it has become a guardian god of Osaka Castle.

During the celebration, which is attended by about 1,000 local residents every year, the “gohoren” is paraded along a 3-km-long route. The festival also features a traditional lion dance performance given by local elementary and junior high school children.

The initiative to rebuild the float was inspired by the parishioners’ long-cherished desire to revive the shrine’s long-held tradition.

According to Ikukunitama Shrine’s officials, the ritual with the use of a phoenix float was last conducted in 1944, not long before World War II came to an end.
Since 1990, the shrine’s deity has been loaded onto a truck and transported to Osaka Castle.

The officials said, however, that the newly built float will only be used to move the deity from the shrine to the castle and that trucks will be used to bring it back home again.
- source : Japan Times - June 25, 2014 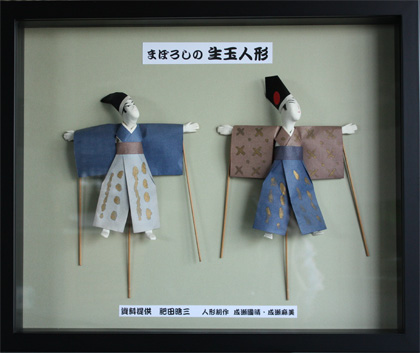 They were once sold at a 駄菓子屋 Dagashia sweet shop in the compounds of the temple 法善寺 Hozen-Ji in Osaka Minami.
Later they were made by 前田直吉 Maeda Naokichi in a sweet shop at Ikutama Shrine. When Naokichi died, his wife and daughter continued to make them, but after WW Ii they died out.
There are seven types, a man with an 立て烏帽子 Eboshi hat, Sanbaso dancer, Samurai, Daimmyo, old woman and old man 武士、大名、娘、老婆、老爺.
The Eboshi might represent the Kamigata Rakugo story teller 米沢彦八 Yonezawa Hikohachi.